Share All sharing options for: Miami: Mark Whipple and the West Coast Offense

What is the West Coast offense? Emphasis on balanced football from traditional pro-sets and structure. Generally, alot of passing in the 1st half for quick scores sets up the run in the 2nd to protect an early lead, but the run game is still important. Overall it's a very detail-oriented approach to the game that emphasizes technique, execution, planning, and strategy over raw talent. Instead of "take what the defense gives you," the overriding philosophy is closer to "make the defense give you what you want by outsmarting and outplaying them."

In its original form, the WCO was a very complex and verbose offense, so installing it in college with the NCAA time limitations was very difficult. Miami's new OC, Mark Whipple, has installed a simplified version of what was run with Andy Reid in Philadelphia and has so far proved that he can simplify a huge playbook and teach a brand new scheme.

What does he do? What happens with this modern WCO is that you essentially have unbalanced formations and mix alot of ace-back sets with two-back sets: Splitback Veer sets, Pro I, Offset I, Double Tight I, then 3/4 wide sets from the ace formations, but without much motion.....essentially a mix of the One-back offense with the old West Coast Offfense. To protect the QB with only 5 men, they do a fair bit of bootlegs and waggles. 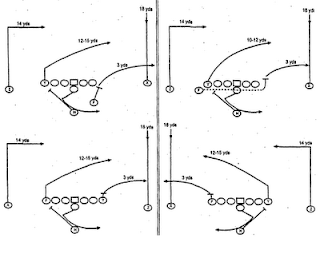 Another key is that while Miami has made huge plays, particularly on first downs, their bread and butter is short-to-intermediate routes by the running backs and TEs. Quick passing on first down is a tenet of the WCO/LaVell Edwards systems, and many times the primary receiver is actually the RB or TE, not the WRs. They attack the underneath zones while simulaneously stretching and clearing the coverage with deeper routes and crossing routes by the WRs. One reason why Harris has succeeded is that Whipple puts multiple receivers running different routes within his vision to weak/strong side, called triangle reads. That way, Harris doesnt have to look far for the open man.

If a play works continuously, Whipple will keep running it until the defense adjusts, and he's not afraid to go with power running, especially in short distance situations. His core run plays are the usual Iso, countertrey, and zone/stretch runs. Then he sets up deep throws well with play-action off of them.

A good Smartfootball description written before the Miami-VT game is here, previewing a few of the concepts Whipple uses along with his background. I recommend reading all of it.

As an illustration of the complexity of the true WCO and how it attacks coverages, I wanted to go through this very simple play:HB Read Option Z Dig. 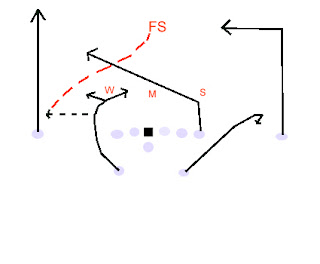 It can be run from any 2-back formation, shown here in the Splitback Veer set. In the WCO the HB needs to be a versatile athlete who can run, block, and catch the football. He also has a number of pattern adjustments that can be put into effect. In the formation above, he is lined up behind the OT in a 2pt stance so that he can see the LBs and the coverage, and the width allows him to get into his route.

In the play, the X runs a fly route with an outside release (meaning he runs around the CB to the outside). The TE or 2nd receiver to the strong side runs to a spot about 6-8 yards upfield with an inside release, then cuts and aims for a spot 15-18 yards downfield that should be vacated by the X. The Z receiver runs a 20 yard in route. You can see then the pattern floods the weak side with receivers, when the defense had adjusted itself towards the strongside. The defenders shift over towards the weak flood, and the Z receiver will find an open hole, especially against Cover 1. Underneath, the FB runs an arrow route, further helping the Z because the underneath coverage will adjust to pick him up. But in this play the HB is the primary receiver. The QB read progression is weak: the HB, the TE, then the X in that order.

As the primary, the Back has to make the appropriate reads based on the coverage the defense shows. Here is a basic rundown of what he can be told do.

If the defense aligns in a 3-4 Cover 3 look, he finds a spot between the Mike/Ted (Ted is the strongside ILB in a 4LB set) and Will, about 6 yards deep. If the defense shows a Cover 2 look, there will be 5 underneath zone defenders and his job is to find the hole between the CB playing the flat, and the LB's hook/curl zone. 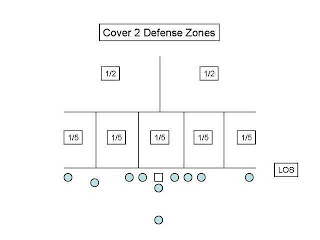 Against Cover 1 or Cover 2 Man Under (which Clemson plays alot of), the Back releases hard against either Will or Mike, and has the choice of cutting inside or outside to get open. If one of the LBs blitzes, he just runs at the other one directly, then makes his choice which way to cut to get open. However, if both LBs to his side blitz, one of the safeties will have him in coverage, coming from a deeper position. In this case, he runs a shallow flat route towards the sideline. If the S fails to make the tackle, the play will be huge. Since this is a hot route, he has to look for the ball immediately and it must be thrown before the Safety can make it down in coverage.

What if I choose to take away the HB route by squeezing him with two LBs to his side (as we would see in Robber with Will playing Man on him)? In that case the TE should be open behind the linebackers.

All this assumes the 5-man protection can handle blitzes. The decision by the staff will be whether to block the Center to the strong or weak side, and that changes the Backs' blocking assignments. If the Center blocks strong, the HB has no called blocking assignment but releases, watching the LB to his side. If the LB blitzes, he expects the FS/SS to pick him up and cuts to the sideline. If the Center blocks weakside, the HB knows he has no block at all. If the WLB blitzes, the Back runs his normal route into the space he vacated, knowing the FS will have to pick him up.

How did Virginia Tech handle this offense? Well first off, VT came into that game pissed off. They played with real fire on defense. Miami didnt look like they wanted to be there in the cold rain. Also, Bud Foster blitzed the shit out of them. Zone blitzes, man-man key blitzes, all early in the game and they did a poor job of picking them up, particularly on the backside. They werent unconventional blitzes either, nothing terribly different from what Clemson would throw at them. Then Foster went away from it, and came back to it again late in the game. Zone blitzing is a key principle used by most Defensive Coordinators in the NFL to stop the WCO, by confusing the backs and receivers on their reads.

OU got good pressure on Harris as well, and I think most people would agree that with a healthy Bradford, OU likely wins the game. Georgia Tech was handled rather well by Miami, as Miami changed their front (usually they play an EVEN 4-3 Stack) to mimic what Clemson was doing earlier to stop the Dive, and GT plays awful pass coverage.

Hopefully this gives a decent introduction to what we'll see from the 'Canes.