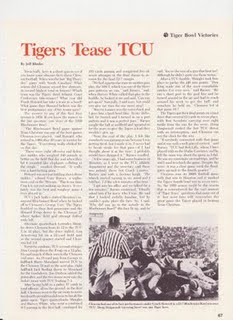 Offense-A spread/pro-style, not all that disimilar from our own in some respects. Its quite balanced and RB J. Turner is quite good, as are the freshmen behind him through 2 games. QB Andy Dalton threw for 2500 yards last year and yet TCU is primarily a running team, so he's the type that doesnt lose a game for you. Dalton is a very consistent game manager who doesnt turn the ball over much or take big risks, which I would expect from a defensive-minded coach. Dalton is capable of scrambling, but in the several games I saw, he's mostly a statue in the pocket. TCU tends to use alot of 3/4 wide sets in shotgun with a TE and RB, and then also quite a bit of power-running formations to get good matchups. Its what I call an offense that spreads you out just to run on you. TCU also brought back their leading receiver. Their OL is tough and well-coached, but they have never faced a DL as talented as ours. Not even Oklahoma was as talented up front last year.

I do not expect TCU to cause tremendous problems for us, they do not have the same skill talent on offense.....assuming we didnt forget how to tackle.

Defense-Patterson does what Danny Ford once did: he gets speedy athletes and puts them all on defense, then coaches them up to play. Future NFL 1/2nd Rd pick Jerry Hughes (4.5 sacks already) came in as a RB.

We've written the article on the 4-2-5 TCU runs, but this defense loses 7 starters off last year's team, and thats the only reason I think Clemson can have an edge on them. If this was 2008, I'd predict loss, because no way our OL could handle the pressure. The unit has had at least one sack in 26 consecutive games. Their secondary is good at CB, but weaker at safety. They lose 3 of 4 DL starters, only Hughes returned, so we should "in theory" be able to do something with the other side of the line.

But TCU plays pressure, and have been susceptible to big plays. OU beat them on long plays last season, not sustained drives. Virginia had some success with their new spread in the running game, due to the very large splits on their OL. Generally Cover 2 teams dont zone blitz as much (recall Tampa 2 is actually Cover 3) because with two playing deep and one underneath zone being vacated by a blitzer, it creates an extra seam or a mismatch with a DL on a receiver over the middle. However with 5 DBs, and split coverage, TCU has fared better with it.

As of right now, Hairston is still leaning to "no-go" but its a gametime decision. IF we cannot have him in, then Plan B must be to run directly at Hughes and wear him out, as well as keep the TE in to block. If I were Napier, I would try to take advantage of overpursuit by running HB screens to Spiller, but since he didnt do it against Morgan, who the hell knows.