Korn, Allen, and this weeks Presser

Share All sharing options for: Korn, Allen, and this weeks Presser

Quotes from the Presser:

We looked at eight plays ... if we win three of them we win the game. Those are critical.

While true, Bowdenesque. He was later asked about it:


We've heard a lot of the one play away menality over the years. It's probably tough for you to know how close you are. How close are you?
Swinney: How long was he here? Coach Bowden was here for 10 years. I've been here four games as a head coach. Three years from now if we are having the same problems get somebody else in here. Fair question. I hate to bring up Alabama but that's my alma mater. He (Saban) went 6-6 in his first year. That's a fair question based off of what you are seeing and you can think what you want and speculate all you want to. But this a different football team. There's a lot of ball left.

At least he will own up to things. Bowden would say something like "well we've got new facilities but they got 85 players too."

Then where were those plays in the 3rd quarter with a lead on the scoreboard? 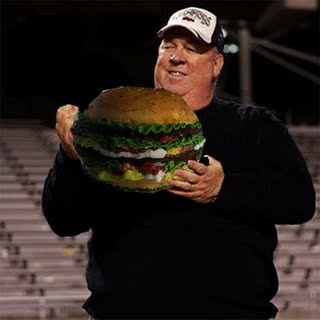 Looking at their offense, they are very very balanced in what they do. They are multiple in what they do with their groupings which creates some serious game planning during the week. You have to have your coverages match that. They want to be able to run the ball but they will take homerun shots. They are tough, they are physical- they have always have been.

This kid Smith- is leading the league in all-purpose yardage, not C.J. Spiller. Their quarterback is a good player- a little better runner than what we'd like him to be. I'm sure they will test us as we prepare to handle their quarterback.

Defensively they are young. They have a new coordinator that is completely different scheme on that side of the ball. Night and day from what they have been. They are a four-man front but they seem to go more to an odd front with a lot of blitz packages. They are getting better. They did a good job against Rutgers- but there were a lot of turnovers in that game. Their defense held them really really good. It's a team that I see is really improving on that side of the ball. Impressive safeties and really really big guys inside.

An odd front basically means that they have a DT lined up over the center as a Nose Guard, as in a 3-4. It can be extended to mean that they run an over/undershift, so that one of the OLBs is playing on the LOS (so it looks like a 5-2), usually done in tandem with having a tilted/shade DT on the center. They used to play an even front stack: both DTs lined up across from the Guards, with the LBs directly behind the down linemen (called stacking). It makes offensive assignments change on the front in blocking schemes.

On the WR play:


"I don't think we've had four receivers get 40 or 50 snaps a game at all. We got four or five guys- that's what we are working with right now. That's all we've got. They have to step up and play better. It's not about potential- it's about performance and production. Starting on the practice field. We certainly need guys to emerge there...Marquan has shown some flashes. Jacoby is solid. Ashe is steady and plays with the most effort. He's the most consistent as far as doing his job right. He had one drop Saturday but has been consistent in everything else. Clear needs to get going. Xavier is just getting back. Jaron Brown is the guy I think that can emerge for us given the opportunity based on practice.

Ashe might run some routes well, but he cant catch a football Dabo. Xavier should be producing by now as a Jr. and Brown and Jones need to get open and then get the ball.

Can you assess your play at quarterback?
Swinney: Did a lot of good things Saturday. It wasn't ideal conditions. Y'all probably were somewhere dry (laughing). Here's a guy in a pouring down rain storm making big throws. He missed some plays. But same thing- he's a young player in a huge role that will continue to get better. Anybody that thinks he's going to be perfect hasn't played the game. He's not going to be perfect but he gives us a great chance to win. Took care of the ball- no turnovers. The biggest thing Saturday was there were plays there that weren't made that he needs to make.

All good points, its good that Parker didnt turn the ball over on his bad throws against a skilled D, but a couple of them could've been picked. If he keeps throwing behind WRs, that wont continue though.

-Since Deptula made mention of Korn possibly transferring to App. State, TardNet has been in a hissyfit. LW writes about Korn addressing these things after the TCU game here.

What I'm wondering is why anyone didnt expect this? Its painfully obvious that we have 3 highly-touted QBs, and all are winners in HS, and all will want the ball, and that one would eventually transfer. DUH people, did you not expect it?

I have said several times: at least one of these guys will not be here next year, and it would be either Korn or Parker.

If Korn has the job, we could keep Parker because of baseball until he gets drafted. Boyd would probably stick it out til he's a soph, and then if Parker stuck around, Boyd would transfer.

If Parker locks down this job by the end of the year, then its his next year, plain and simple. When I say "lock down" I mean simply continue to improve, he doesnt have to have 5 300yd/3TD games to lock it down. Korn will transfer. It doesnt matter how Boyd plays in Spring or August, he won't unseat Parker if KP improves for the rest of this year because even if TB shows out in practice, its still just practice.

Remember who else has shown out and been raved about in practice the last few years? McClain and Rendrick Taylor (several times). Boyd would take the #2 spot behind a guy who produces, and hope that Parker leaves early and that he'd get his chance. He might even try to use this year as a Medical, and take another RS so he has an extra year to play.

So wake up and think folks. The only way Korn sticks around is if Parker destroys people in baseball and becomes a high draft pick, so the best case for us is if Korn sticks with Clemson until the end of May. He can graduate from CU in May.
I can understand why Korn is upset. He went 30-something-3 at Byrnes. He believes that Dabo "guaranteed" he would play. Dabo said this after naming Parker as starter:

But from Korn's comments after being named backup, it appears that Dabo did tell him that he would play every game. Perhaps he heard what he wanted to hear? Indeed, I thought from what I read at the time that Korn would play 1-2 series a game. So is Korn right to be pissed? Well, I would say no because Dabo is right in his quote above...you have to produce, and Korn knows he hasnt produced....but then Korn has been quite unlucky, and its not all his fault for what has happened when he goes in.

Dabo said this today in the presser:

What do you think about Korn saying he was promised PT?

Then he was asked if the statement by Korn was semantics or open to interpretation:

-Dwayne Allen has been a hot topic since the game ended because of his comments to reporters. Allen stared by saying that Dabo reminds them that the ones that produce get the ball the most, and that he knows that he has to make plays to get the ball more.

But its his comments about the use of the TEs that rile people up. I doubt most of the ones who are so riled actually read the LW article, but he did say he wanted the offense to utilize the TE more, like UGA or SC.

He said that he did not slip on his pump route at the end of the game, and that Kyle sailed it and he just couldnt adjust. That much I could see, since he does do a stutterstep on the route, but it looked to me like he had to catch his balance.

What he has to be commenting on is how we utilize the TE, because we don't throw to the TE less than Georgia if you look at statistics. Clemson uses them to attack the flats, whereas SC uses Saunders to attack the seam in Cover 2. I wish Napier would do that as well, as I said in my latest Raycom blog on the things Clemson must do to improve.

But honestly, this is at least three times, by my count, he has complained about balls not coming to him. Shut up and play kid.

Etc.
-Nick Saban on defending the fade route in man/man coverage. A good read on the technique.

-Dalton Freeman is getting snaps at Guard now, and expect Wilson Norris to also get much more PT at Guard, while Hairston believes himself to be 75-80%.