Inside the Steele Curtain: Defending the spreadwith the Nickel defense

Share All sharing options for: Inside the Steele Curtain: Defending the spreadwith the Nickel defense

The first topic to address is the misconception that the spread offense is a system on its own, it isnt. The spread is a set of formations with 3 or more wide receivers, thats all. Steele comments in his press conference that he expects multiple formations from Tony Franklin's offense: wishbone, zone read, and read options. The 4-3 front is capable of defending the spread, and can handle anything another team throws at you, but there are a few things to go through each week to decide whether to take out that LB and put in another DB.

Vic Koenning ran a 4-2-5 here last year, as does TCU. But their schemes are very different. VK's we've covered, and its a more spot drop read-and-react zone scheme where the SAM LB was actually more like a SS. This week, you will see Clemson doing things on defense that you will likely see from TCU's in a couple weeks.

Why go to a Nickel look?
1. You are putting more speed on the field. Usually you recruit another safety and bulk him up to playing a hybrid SS/SLB role, like DeAndre McDaniel.

2. Its a one-gap defense. LBs only really watch one gap, and their alignment doesn't hardly change from formation to formation. However, should they miss their gap on a running play, you are toast. Depending on the reduction of the front, sometimes one or two LBs may have two gaps to cover in a 4-3.

A 4-4 scheme like VT is not all that dissimilar to teach. Their LBs are more like SS's, its just that they do different things with the front. It can be equally good against the spread.

3. Speaking of which, you can do different things with your free safety. A true FS is a deep player who is a sure tackler, but can cover alot of the field. Nickel is suited to more Cover 3, and he's more of a safety valve. In a 4-3, he has to be more of an attacking player, and a better tackler, and I would say more of a field general. In a 5DB look, you can take a smaller faster FS and put him deep, and recruit two SS's and put them in the game. As a result, the SS position becomes easier to play because his checks are simpler, and can be a real hitter or run-stopper (Hamlin) like a Linebacker. This would also mean the FS gets less exposure in run-support, something which makes them famous and gets headlines as a heavy hitter (Ronnie Lott).

4. Ask yourself 'Are they using the Spread formation to create problems in the running game?' Rich Rodriguez does this, as does Urban Meyer. His spread is not about the pass, its about spreading you out and creating running lanes. If you run a 4-3, it makes sense to play the spread with your base, if that is the case.

5. Particular formations are easier to cover, as in Twins, or Doubles.

This week, going to the Nickel, Sadat Chambers will be in the game more as the FS, with Gilchrist as the nickel corner. His position is not just like that of a true corner on the edge, but teaching him the things he needs to use as the FS in the base 4-3 will work at nickel.

The major problem to watch for is whether they decide to run 4 verticals, e.g. from doubles above, and you're stuck in Cover 3. The underneath zone defender is playing a matchup zone (tight man within his zone) and once two players release into the deep 3rd, a CB or S has to play two guys by himself. How do we deal with that?

The first adjustment, particularly if they play Twins or Trips, is to bring your FS over to the wide side (VK did this quite a bit) and play a 1/4, 1/4, half coverage. Its still cover 3 matchup, and the CB is playing one half the field with the boundary as his help. He must force his reciever outside or he could be toast. 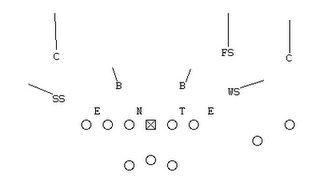 This corner is not quite playing a deep Cover 3, as he has no underneath help, and its more of a matchup zone/man coverage now. The FS is rolled over onto a weaker receiver in the slot (since he usually has not-as-good man coverage skills), likely Gilchrist but perhaps McDaniel. A weak safety (probably Chambers this week for MTSU) will be playing deep middle.

Against an empty backfield, you simply have to matchup one-on-one. You can still play cover 3, and you can disguise who is actually going deep, but its likely to still be the safeties as their alignment will already be deeper pre-snap. Its more likely that this is when you'll see straight-man coverage and blitzing the LBs.

To take the problem of a CB/S having to play two guys in his deep 3rd, you can switch to Quarters coverage. This brings us back to boundary/field adjustments, which we ran last year under Koenning. The passing strength is set to the Field (wide) side, or the side with the most WRs. Usually the left side, since a RH QB throws to his right, which is the left from our perspective. I will mention more about Cover 4/Quarters and "Bronco" against Trips at some later time.

Pressuring the QB.
There are many things you can do from the Nickel, but I don't believe its as versatile as the 3-5-3 or even the 4-3 when it comes to crazy blitz angles. You will see some CB/S blitzing, and DL pressure is created through the use of stunts. Here is one particular blitz from Saban's playbook: a cover 1 CB blitz (star "*" is the nickel back, "$" is either a Sam or Will (now called Money), but sometimes another big safety). From Steele's comments this will be Scotty Cooper. 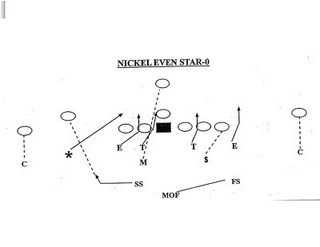 The dotted lines indicate who matches up on who in man coverage. If the TE blocks down, or the Back stays in to block, one of the two LBs becomes a Robber. The term "even" refers to the front reduction and the placement of the DL and LBs. 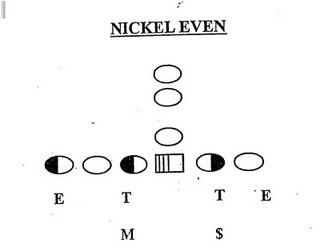 The DTs, in this front, each have 2-gap responsibilities. Everyone else has one. The
LBs, Mac and Money, key the OG and nearest RB. The Ends key the TE/NB/OT in that order.

Finally, a Cover 3 zone blitz. First you declare your front, in this case "Okie" 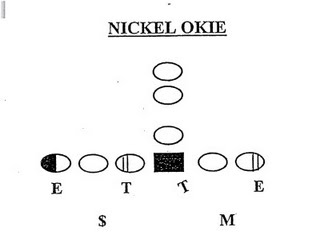 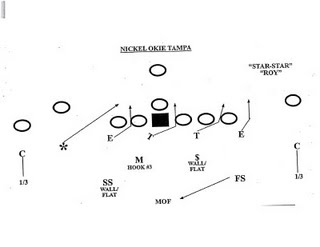 Notice the Nickel and SS switch responsibilities again, with the SS picking up the slot WR off the line and rolling down into his underneath zone opposite Money. There is a gap in the middle of the field to the TE side that Mac may not be able to cover from his hook zone. His responsibility will be more the RB than that TE.

In a Trey formation (3 WRs to one side, 1 RB, 1 TE) the adjustment is straightforward, with the CB shifting over top of the TE bracketed with the FS. Nickelback gets matched up on the inside slot man, with the SS rolling over the 2nd slot man. This generally can be given a double call and they'd check into a 1/4, 1/4, 1/2 setup with that CB ruling one whole side of the field. For Trips, shifted to the opposite side, the FS becomes the blitzer, with the nickel taking the flat and the SS dropping back in the middle.

I will save more on Nickel pressures for TCU game-week.

Just as an aside, I noticed Chris at Smartfootball wrote a blog on the scrape and defending the zone-read play using a 4-2-5, and since we'll see this play from our own offense many times, I think you should check it out. It'll also give a hint about TCU's philosophy.