Inside the Clemson offense: Spiller's TD Play,Pro Wing X Over

Share All sharing options for: Inside the Clemson offense: Spiller's TD Play,Pro Wing X Over 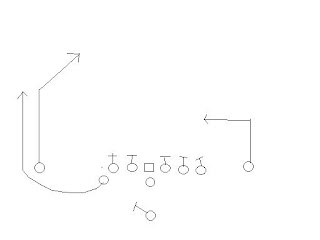 Here we have a breakdown of the TD play to CJ Spiller last week.

The Play
In this "Ace X Over" or "Pro Wing X over" play, the number one receiver (X) runs inside to a deep post over the top to exploit the defensive coverage. X is normally the first QB read on the play, and is meant to draw the FS and CB away from the sideline; if he's open the QB is meant to hit him. His side is the two-WR side, so the progression is likely deep-to-short.

Specifics
X (Jacoby) runs a post, which is a straight run 10-12 yards and then a 45 degree cut inside. The CB on him might be playing zone, but is responsible for the deep post and must stay with him. It is a route used to stretch the defense vertically and open holes underneath.

The H-back follows underneath on a wheel route. A wheel route is simply that the RB runs out on a little flare route (a little curve to the sidelines) and then runs vertical. A flare would be to run out and stop, while the wheel continues. Wheels are useful because the defender will bite when the guy turns around to look at the QB, and come in thinking its just a little dump pass, then the receiver runs right by him. As such, its very useful when they are trying to jump your "out" routes.

The Z receiver (Ashe) runs a Dig/Square-In route. Off the line, he is trying to sell a GO route (straight vertical) and then when he gets to the route depth (10-15 short dig, 15-18 deep) he cuts inwards parallel to the LOS on the Square-In. A dig is just a little different, in that he cuts to show a post initially and then parallel inwards, but we cant tell from this footage.

The TE and Taylor stay in to block. Taylor decleats the blitzing LB. The play is designed to look deep and then short, as most pass plays are, but the QB progression through his reads can change, in general, based on his presnap coverage read (e.g., out to in, or long to short).

A simple variation, if they could handle the DE better, would be to run Ashe a little deeper on his Square-In, and run the TE on the same route (a drag) underneath him.

The Defense
Watch closely what the defense is doing in the play. They align in a 4-3, with the FS aligned about 10-12 deep and over the TE, and the SS about 4x6 off the line (6 off and 4 yards wide). At the last second, GT shows their hand and the WILL comes up to show a zone blitz.

On the snap, this initially looks like straight Cover 3 to both of us, but watch the rest of the play and that FS. The SAM reads run first, and sits over in the flat zone. The FS aligns over the top of the TE, and isnt watching the post at all. If anything this might be 1/2, 1/4, 1/4 Cover 3, but perhaps a combo coverage (zone + man). His hips open to the strong side (he would never focus that much on one side of the field in a straight 3) and he sits instead of backpedalling. They have to be playing zone (on the TE's side) because the strongside corner is not to be found on the dig route and the FS's head is on a swivel (and looking into the backfield) and eventually turning to run with the Z when he comes across the field.

Then watch the Wolf (GT's LB/SS hybrid). His eyes start in the backfield and he immediately moves with Spiller. We don't think the GT defense realized that Spiller was lined up in a wing spot when this defense was called. They probably saw Taylor come in and checked to this play without looking to see he was the tailback. By the time the SS realized what was going on, Spiller had his shoulders turned up field and the defender was totally screwed.

A very similar play (with the TE running underneath) is used by USC in this video on QB Reads, check it out.