Inside the Clemson offense: HB Power/Trap

Share All sharing options for: Inside the Clemson offense: HB Power/Trap

Each week we're going to try to highlight one or two specific plays that either resulted in scores or were run very often by the team. This week, since Clemson showed so much I-formation running for the first time in years, we'll go over the HB Power and the Trap. Since we havent covered offensive plays before, the first topic to cover is the terminology. Have you ever wondered why a play has a complicated name like "Spread left 24 draw"?

The "Spread Left" indicates the formation and the strength. Spread is a generic term, and could be a 2 or 3 WR set on the left. It could be "I right/left" indicating that the TE or two-WR side is the right or left side in the I-formation. "I right motion" would mean that one WR could be moving from the Flanker to the slot. The specifics depend on the particular offense you run, and the coach who built it up, but the same plays are there in various formations in every offense.

To understand the numbers, you have to know the offensive numbering system. The first number in "24" refers to the numbering of the offensive back, the 2nd to the lane where the ball is supposed to go. The QB is designated "1", the RB "2" or "3" and the FB usually "2", "4" might be an H-back or 3rd RB in the Power-I formation (I with 2 FBs/1 RB) and so on, and sometimes will be the tailback. Running lanes go from Center to the sidelines, and are assigned a number. Each gap between offensive players is assigned a number, even on the right, odd on the left. So the A-gap is "3" or "2", B-gap "3" or "5", and so on. "0" and "1" are directly behind the Center, like a right/left QB Sneak. 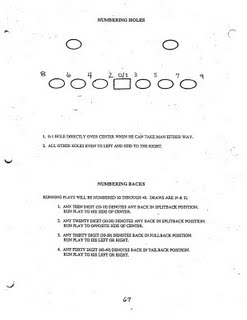 The Trap
The play shown here is an I-Right 36 Trap: 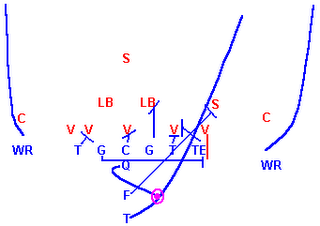 The term trap comes from the idea that a lineman is left unblocked by the playside G/T and thinks he's home free until he is walloped by the pulling guard....i.e., trapped. In the play above, it is the OLB/DE who gets trapped because the TE doesnt try to hit him, and he thinks he's free. In this play, the backside LT blocks down on any defender capable of shooting the open gap behind the pulling LG, thats his chief task. Anyone who can shoot the gap will stop the play for a loss. He blocks the End first and then releases to a DT if he comes free. Hopefully that DT gets picked up by the Center, even against a 4 man front, and this call is made at the line. The RT and TE double-team the DE in this 3-4/5-2 front diagram, and the LG pulls out and blocks the OLB/DE. Against a 4-man front it will change of course, but its pretty easy to see how given that most 4-3 teams use a shifted front.

The TE only stays on the End for a count of one or two, then releases him to take on a LB. The FB charges up the 6 hole between the RT/TE to hit the first man he sees to come free, either outside or inside, hopefully a SS or scraping LB. Recall that its a trap, and the Guard is following him into the hole to take on that outside Backer/DE. The RB takes the ball and charges right behind him into the hole that should be open. WRs are either charged to block their man, pushing him to the boundary, or occasionally put in motion to help chip an End or OLB, while the QB should be taught to pretend like he still has the ball and sometimes fakes a throw to a WR running a Go route to draw the safety deeper.

Inside traps are the same concept. The Center takes on the DT across from the LG, and the RG backs away from his DT for a count, leaving him unblocked until he gets slammed by the LG pulling across behind the Center. The RG then continues upfield into a LB. In I-formation, the FB steps up into MIKE and the RB follows him through the hole.

The Off-Tackle Power plays are run alot within Clemson's offense, from various formations. Its basically a gap-scheme, and the OL angle-down blocks anyone and the pulling LG takes on a LB, and somebody is going to get double-teamed on the defensive front. You would try this play to neutralize a very good 3-technique DT, for example. As a fan, watching the line, you'll see them suddenly go left, pushing the defense to the side away from the play and the Guard pulls out to take either an End or LB depending on whether its a type of inside or OT power play. The TE and RT are meant to double-team their DE, and the FB runs out to hit SAM. The RB follows his FB to the OT-TE area in this "36 Power" play. 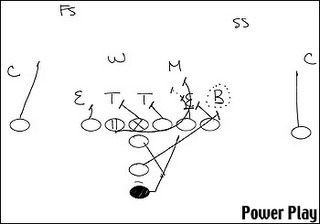 Specifics...
The QB is coached to open to his right and hit the RB in-stride and then continue as if he's rolling out to the left.

The TE, after double-teaming the DE to get him out of the way, releases and jumps onto the first scraping LB he sees, opening a funnel on the strongside. Your TE cant release too soon, or he sacrifices technique. He cant release too slow either, because the LB is coming. So the player is taught to block the DE into the LB, and then release, same as the Trap. Depending on the front, the TE can immediately release to an inside LB, if its a 3-man or 4 man shifted to the weakside, for example.

The LT stays on his End, if he's the only man out there, and the C-RG can either double-team the Nose or angle-down the man across from them. The FB is taught to step towards the inside leg of the TE and play inside-out leverage (pinning his opponent outside of the lane) on the biggest threat to the play he sees, usually a scraping LB or a SS. However, his first step is actually straight ahead, feinting a lead play to the left, before taking his step right into his defender. If a defender jumps into the lane, the FB is told to pin his shoulder and push him inside, letting the RB bump outside. Of course one must adjust to what the defense is doing, e.g. blitzing a safety or shifting their front, and the FB is generally told to hit the first guy he sees that can threaten the play and the Guard is as well.

Against this 4-3 stack front, the RG and RT are double-teaming the DT and the TE takes the DE. Its still an I-right 36 Power, but the assignments have changed. 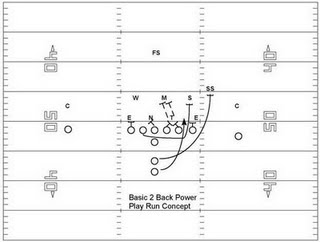 The blocking scheme call for the OL is usually very simple on Power plays: Gap, On/Over, Down; Gap, Down, Backer. The Gap rule basically means that the RG and RT are to allow NO penetration to their inside gap, its a generic term. On means to block anyone anywhere on your pads. Over/Backer basically mean to move to the second level and find a linebacker to block. Down means to block the defender across from the OLman to your inside. You can see how this will form a double-team on someone on the right side of the defense.

Much of this video is simply various power plays.

If executed perfectly, the RB gets into the secondary and will have only one or two men to beat one-on-one.