Chris at Smartfootball got hold of the clip we uploaded for the TCU game review, and looked at the variation of the zone read that TCU ran against us last weekend here. Thankfully it saves me a couple hours of writing.

...Against TCU, however, in an otherwise solid defensive effort the Tigers allowed TCU’s quarterback Andy Dalton to rush 19 times for 86 yards, many of them on key conversions. After the game, Clemson defensive coordinator Kevin Steele appeared flummoxed — or at least very caught off guard — by one spread-option variant in particular that TCU used....

...I’m going to disagree with the description of the play as a variant of the zone-read, though all of these plays fall within the same spread option family. Indeed, this is a play I’ve seen Florida and Urban Meyer use before, though the pulling guard is a nice wrinkle. I call it an "inverted veer."

In the typical veer play from a spread set, the line blocks down and double-teams the defensive linemen on up to the linebackers. They leave the defensive end unblocked (except when they run midline veer, in which case it is a defensive tackle) and read that man. If he steps down for the runningback, the QB just gives the ball and steps around him. It is just the old first-read of the triple option adapted for spread sets. 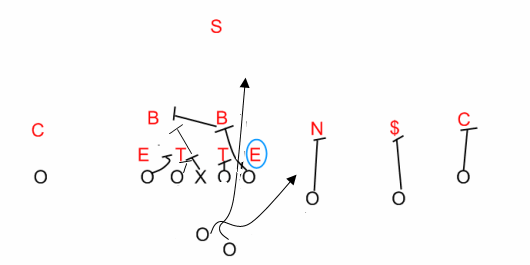 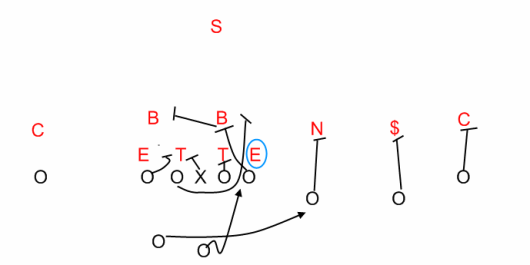 In that way I disagree with the characterization of the play as a fake-zone read where the QB then runs back to the other way. You can see the runner is taking a wide angle. That said, I don’t know what TCU’s read was, but this is a play I’ve seen at least for a few years. And again, Meyer uses it at Florida with his fast runners heading outside and Tebow, the better inside runner, going inside.

Finally, the one wrinkle TCU has is the pulling guard. I think that was just designed to get better blocking at the point of attack, though TCU had them so crossed up he didn’t even end up blocking anyone. This scheme has a lot of similarities with how teams block the shovel play.

I suppose the reason Steele and Clemson had so much trouble with this hinges on what his linebacker’s reads were. I take it they were reading the quarterback and thinking backside with the zone read. If they read the pulling guard, for example, there wouldn’t be an issue with where the play was going. (This is one reason the veer blocking works so well, because the line steps one way and the play hits the other. The pulling guard can give this away.) It is just like on the famous counter trey play: if the linebackers read the pullers there are no issues with stopping it (though they may be weak to some other play), but if they read the fullback blocking away they can get crossed up.

I would point out that TCU ran a traditional zone read much more than this play, about 12 times total by my count, while this play was obvious to me only 3 times. DaQuan Bowers made the correct moves on the traditional zone read, taking the RB and putting the emphasis on the LB's to scrape around and make the play. However Maye was blocked out or in bad position to make a tackle several times by the Guard to the playside, as well as Conner/Cooper or whomever was playing Money (2nd LB in Nickel) on the particular play. Notice in this play in the clip, both LBs are coming in, so we were caught totally out of position.