Share All sharing options for: Defensive breakdowns against GT

There werent a terribly high number of critical defensive breakdowns in this game, it was more a coaching mistake that cost us. The defense only gave up 16 points against a good rushing offense that piled up 300 yards on the ground and 420 overall. The problem is that a few of the plays were run again and again, and Clemson took longer to adjust to them, likely because they hadn't seen them in tape or practice, and if you get 7-10 yards a crack and push a few 20-30 yard plays in, the rushing stats begin to pile up. But, 200 of GTs yards were in the 1st quarter, and after Clemson shut down the FB Dive, they really couldnt get anything going til late in this game. I'll look at two plays that beat us: a crack arc triple option play and an inside QB zone read play called a midline series. The TD play to Anthony Allen was a crack arc screen that was really perfectly executed by Georgia Tech.


Watch the play unfold a few times and watch the blocking motions. This buck sweep is a staple of the Wing-T/Flex offense. The left Wing is Allen coming around on a sweep option. The play is designed to go to him. Against our 7-man front, GT used quite a bit of zone blocking, and this play appears to me to use that.

Nesbitt fakes the FB Dive, and as we've pointed out, the Dive is the first key to stop. Actually this play is covered in that post as well as their assignments.

The offense can change the play to allow for pulling two linemen or just the backside guard, or even downblock the whole line if they choose. Since the DE crashed inside to stop the Dive, the OLB is out there stranded and forced to choose who to take. He comes in to block the alley for the QB, and forces the pitch to the trailing back. However, the WR to this side of the play has executed a crack block on the Safety, and doesnt attack his cornerback. That cornerback is cut blocked by the leading wingback; watch him take his legs right out from under him.

In the play against Clemson, Bowers crashed inside, trying to stop the Dive, his first key. But the DE is not supposed to tackle the FB on a play unless he sees him coming to him with the ball. He took him anyway. The Linemen are also supposed to get a forearm shiver on the Tackle and Guard to help the scraping LBs behind them.

They didnt. Watch the RG come right off the line and take Maye head-on. Watch the RT basically come free untouched and into the secondary to either take out a Safety or the biggest threat he sees. The RG's responsibilty is the MLB. The OLB is isolated intentionally. They are attempting to seal off the backside of the play and they do it well. Maye is scraping (moving laterally) down that side and if Bowers is taken out, the QB is his responsibility. Maye's job is to attack the Guard with his shoulder, to work around him with leverage, but he's late doing it, and it doesnt work and Maye is stood up.

The O-Linemen are told to downblock for a count and then release to the next level to attack the LBs. The RT doesnt even touch Bowers since he collapses inside with Thompson, and attempts to arc-block the FS. He is ignoring Bowers by design. Watch the left side basically leave Sapp alone; his job is to stand pat for misdirection. The left side of the line are designed to double the Nose, then one releases to take on a scraping LB.

With the CB cutblocked, the Guard coming through to stand Maye up, the Safety cracked by the Wideout, and the DE and DT both collapsing on the FB, theres no one left to make the play. Bowers recovers enough to grab Nesbitt and force a pitch, but Conner had already filled the alley. His assignment was the trailing back, Bowers' job was to force, and Maye's job is to tackle the QB.

This play to Roddy Jones is the same play but you may see the outside blocking scheme a bit better.

The 2nd play is the midline option series, the play that Nesbitt ran in the 2nd half that basically generated 5-10 yards a crack. Clemson had stopped the FB dive with Thompson basically playing a Shade over the Center, and he shot the A-gap to take the Dive out every time. The midline is designed to attack that NG with a double team and run away from him. 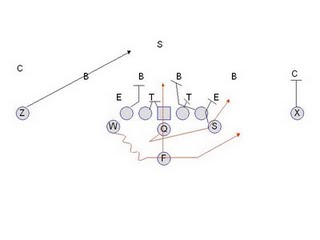 In this play, the QB reads the 3-technique tackle to determine whether to give the ball to the FB on the Dive or keep it. If he keeps it, it basically becomes an isolation play. The FB's aiming point is directly over the QB and he breaks off the Center's block. The play GT ran didnt bring the backside Wing around, he simply went downfield to block/keep the safety honest in coverage.

The Center and Guard to the 1-technique side execute a double-team on the DT, then the Guard should release to the next level. The opposite guard base blocks his 3-tech DT, then releases upfield. The playside wing does a little stutter step to fake a counter/misdirection play to the other side, then pivots and runs back into the DE or a LB. The RT pulls inside and comes upfield to take out a LB, or load-reaches the DE and the QB reads the LB as well as the 3-technique DT. The WRs crack block someone in the safety area.

If the 3-tech DT pinches flat on the LOS, as we were doing in the clip above, the QB keeps it himself into the C-gap. There are variations that include a trap of the 3-technique or a Belly Counter/Handback that also generated a big gain, or an arc block by the Wing. 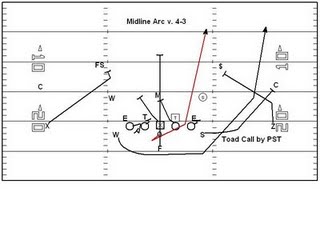 To defend the midline, you can switch your front alignment a little, to an odd look (a 4-3 Under, for example), but you can also attack the playside Guard with the 1-tech DT directly to keep him from releasing through the hole and going to the LB coming playside. Another tactic is to tell MIKE to attack the handoff point directly with the shade NG attacking hard on the Dive. Clemson actually did make this adjustment, but too late.