Share All sharing options for: More on the 4-3: Stunting

Defenses today have to be multiple; there is no true 4-3 or 3-4 set anymore that is played on every down. Last year's Alabama team played a 3-4 base, but essentially only played a 3-4 40% of the time. Saban at LSU ran primarily a 4-3, but he does so many things that you can never pigeonhole his defenses. Why would you run one over the other when you'd run a 4-3 and won a Title? The answer is simply that you have the personnel to do it. If youre hired as a head coach and have 6 LBs who can all play, and only 6 Linemen, what would you do?

This is what bothered me when Clemson fans stated Steele would run a 3-4 here when he ran one at 'Bammer. We dont have LBs here to run it, but you will still see a few 3-4 sets against certain opponents.

What is the 3-4? Its just a front. Its a 'look' you want to give the offense to confuse them, because you want to hide what you are doing on defense as long and as well as possible. So dont be surprised when you see a guy who normally plays DE stand up like a OLB. Virginia Tech, for example, might tell you they are running a 4-3 in the pregame introductions, but it is really a 4-4 (or Gap 8) system....thats why they always seem to have one great tackler in the secondary. They are reducing their fronts in passing situations with a player like DeAndre McDaniel playing a LB position that is really more like a SS, which makes them better versus the pass than you would think a 4-4 team would be normally.

In order to help run support in the 4-3, the most common adjustment is to bring the SS down to LB depth and create an overshifted front, which we've already covered. This lets you shift the LBs over to the weak side, with the SS being (usually) the cover man for the TE or slot WR. 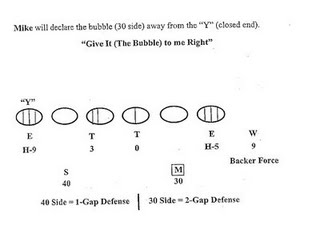 But in preparation to explain other defenses we'll see this year, we think its necessary to look into the other defensive fronts besides the simple over/under reductions. Specifically, the defensive line play.

The first thing to remember is that when coaches use the term 'technique' they don't always mean how to do something, they also mean the player's alignment, this is explained in the article above. 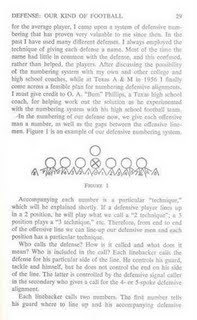 There are various other techniques to teach in combinations on one side of the line or the other, or inside DTs vs what the DEs are doing. For example, there may be a call where you want both DTs to run to the inside hip of the OG opposing them, towards the center. You would call that a "Tim". If its outside, towards the outside hip and to the OT, a "Tom". This is called a stunt, and it just means that you are having someone attack a gap they are not normally responsible for covering. You want to do this to upset the rhythm and blocking schemes of the offense, to create penetration on run and pass plays. One point to remember is that you will only want to stunt when youre penetrating, otherwise your defense is giving up ground. The stunts you use also change based on the type of blocking you're up against: man or zone. (you'll have to click the pic, sorry) 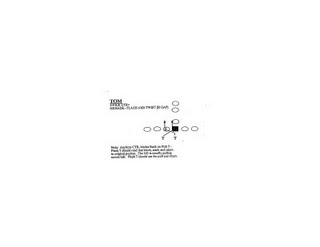 (obviously there is more info on the stunt in the images, but i'm leaving that out for now)

If the DE is told to run a '6' technique, lined up directly across from the OT, he's usually taught to charge inside. So if I called a defensive front "26 Tim" from the sideline, I'm telling my DTs to line up in a 2, my DE to line up in a 6, and the DTs to charge to the inside. If I play a 2 or 4 technique often with my DTs, then they are usually the bigger guys like William Perry or Terrance Cody, who can muscle through blocks. In that case you usually end up using them as a Nose.

Thats just a name, and other coaches may use other stunts with the same name. Against a stunting defense an offense may widen their splits to force the defense to change their gap responsibilties and adjust the front (this is partly why Texas Tech's offense has such success, they have very wide splits).

A 3-technique tackle, like Jamie Cumbie or Jarvis Jenkins, will be more likely to be the 290-300lb guy who can immediately shoot the gap, and more likely to stunt.

A common stunt is to slant your weakside DT into the A gap on his side, and then loop the Strong DT around behind him and into the weak OG's face. More explicitly, one DT charges into the A-gap, the other DT runs around his backside and into the Guard, effectlvely double-teaming that Guard. You could expect that to happen to Thomas Austin this year. The only difference in the figure below and what I'm explaining is that the figure depicts the DT attacking the inside of the opposing guard, instead of his outside. 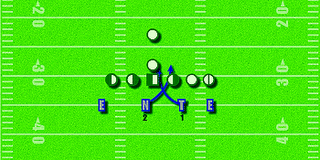 Usually a FB has to pick up the stunting DT, and coaches dont like their FB picking up tackles. A similar stunt is the Spike: 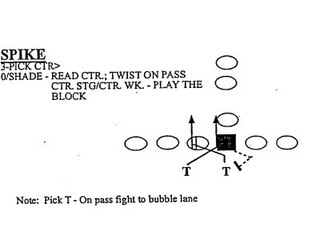 Opposing teams would then be smart to run an isolation play to the strong side, by doubling the DT, singling out the DE, and isolating the MIKE on a Fullback blocker. MIKE has to take him on with a shoulder, not head-up, and force the RB to run towards the DE. That seems to me to be the easiest way to handle such a situation.

A "3-game" or Pirate stunt is with both Tackles and the weakside End ("3" comes from "30" or weakside/oddside, not that 3 guys are involved). Its the same as the above stunt, except that the DT runs outside around the weakside End instead of the weakside tackle. Both the End and the weak DT are taught to charge inside on the hip of their opposing blocker. The only problem here, as with any penetration, is the Trap. 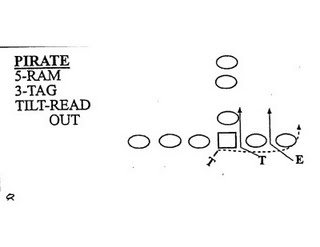 To eliminate that problem, along with cutbacks and isolation, you can run a "4-game" stunt, which is essentially the opposite except that the Weakside DT isnt stunting upfield to the QB, he's waiting to read the blocks and play the Trap.

The next variation on the 4-game is the Storm, which adds the SAM on a run blitz and the DT runs around his backside towards the TE. Obviously, you need athletic DTs to make such a play worthwhile, and you would preferably want to do this to the short side of the field.

An "open" or Jam stunt involves the Strongside End and the tackle. The End charges inside towards the Guard, while the tackle loops around him into the OT-TE C gap. 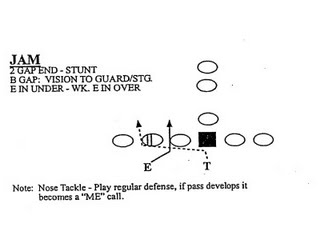 Against triple-option teams like Georgia Tech, the stunts are used to change the rhythm of the offense and break their timing. The option has to be finely tuned and practiced to be effective and stunts are best used to break their patterns. Usually, the best point to attack is the QB decision area: the space behind the OT/TE where the QB must decide to pitch or keep it. The only problem for a coach here is that a player CANNOT miss on his responsibilities; a huge play will result. This is why many teams refuse to stunt against the option.

A common stunt against the option is the End Slant, where your Strongside DE charges into the OGs outside hip, or a pinching stunt where the End charges in with the OLB cheating up to do the same towards the TE's outside hip. 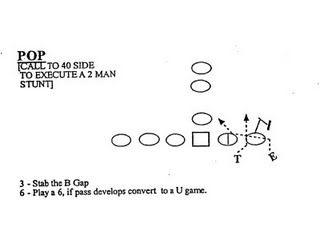 So there is a few of the stunts you'll see by essentially every team that runs a 4-3 defense, all of which will be useful in explaining defenses later on. Tomahawk Nation did a similar post including more on stunts here.