-Offensive Tackle Gifford Timothy (6'6" 288) from Middletown, Delaware, and rated 3 star by Rivals, committed to Clemson last night. He is our 18th commit and was recruited by Boise State, MD, Rutgers, UVA, BYU and Utah.

August 1 through November 28 marks the NCAA-deemed Quiet Period for college coaches. Coaches are on the road from September, October and November and get a visit to a high school on one day within a 42-day period. Essentially coaches have 42 evaluation days in the fall.

-The staff has begun preparing for MTSU directly, though Swinney was extremely disappointed in practice Tuesday.


"If we played today, we’d get our butts beat," Swinney said after the team’s practice, pausing briefly before adding, "but we don’t play today, thank goodness."

"He’ll probably bring more of what you saw when he was at Troy," Swinney said. "It’ll be all four and five wides. Our guys don’t see that in practice, so that’s a drastic change.

"I was pretty disappointed in today’s practice," he said. "I think we got beat today. If we played today, we got our butts beat. Offense, defense, special teams, we got beat."

Although he was pleased in yesterday's practices. It also appears Benton is no longer ahead of Jackson at kicker, and Benton is out with a slight groin pull at the moment.

When asked about MTSU:


"And for us going against their defense, well, we’ve got some questions because they practice against a four- and five-wide offense all the time. So, are they an even front? Are they an odd front? Are they both? … You have to really prepare for a lot more than you’re probably going to see, but you just have no other choice. First game’s always the toughest because there’s a lot of unknowns. But they’ve got the same thing for us."

"I promise you, Stock and them, they’ll have them ready to play," he said. "They’ll be sky high, and they’ll have them believing they can win. Heck, they beat Maryland. Maryland beat us. That’s all they’ve got to tell them. … They won’t be intimidated

-Cory Lambert did get reps at LT in practice this week, just to remove any rust should he have to switch over immediately. Jamarcus Grant got reps at LT as well.

-Jacoby FINALLY returned to full speed practice, but then Dye tweaked his hammy too. Great. Clear seems to be recovering from his rib injury well, but Brandon Ford (foot) isnt going to be ready anytime soon it seems.


"The last four, five days he’s been doing pretty much everything, just hasn’t scrimmaged," Swinney said. "Today he did everything. He dd all the one-on-ones, skeleton, team pass, went one-on-one against (Crezdon) Butler and all them competitively. He did a nice job, caught the ball very well"

-Justin Parker, the top LB on the board, now has Clemson ahead of USuC. This guy would be a huge get for us.

-Gene Sapakoff talks about what Dabo said in his press conference and I wrote below, pertaining to the play-calling by Rob Spence and how the offense has been tweaked and trimmed down to get better execution.

-The State has an article up on the ACC fanbase, and its good for CU.

-Butler and Chancellor are rated as the best CB duo in the ACC, and both are rated in the Top 26 nationally by Phil Steele at CB. Both are Jim Thorpe Award candidates and Greg Wallace writes about how they are working together to make this a special season, then talks about Jonathan Meeks coming in at Safety and making a contribution this year.

-Reasons why Georgia Tech might disappoint in 2009. I bet the GT fans are going nuts over this guy. 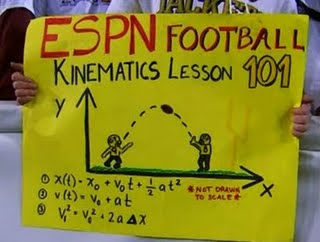 -And Dr. Saturday writes about the long, woeful decline of a former great one, Steve Spurrier.