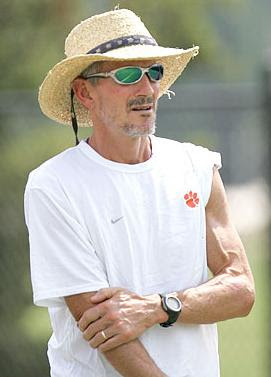 Dabo's first move upon his hire as interim HC was one that we all clamored for all season: firing Rob Spence. It was evident at the time that he had serious objections to how Spence applied his ideas during a game. Recently, during his press conference, he brought the idea up and disclosed the main difference between his regime and the previous one on offensive philosophy.

We've probably taken too much into games around here in the past. Good stuff, but sometimes you leave a lot on the practice field. Hopefully we can be a little bit more diligent and efficient with our time.

"It's not a knock on Spence, I just think that, in the past, with the 20-hour rule and what we operate in here in college football, sometimes it's not as much what we know. It's what those kids can do. That's kind of my philosophy in game planning.

"We didn't have a system problem. Sometimes we were just more about plays than players. And this game is about players.

"We've got a lot of flexibility, which I like. But we've been able to really marry the things that I felt were important to instill in the offense, to things that we felt were very good that we've done in the past as well. I mean, we've done some really good things around here offensively. So we've got a lot of that, too. I think we've got the best of both worlds now."

The key difference, he went on to say, was that Spence had a virtual encyclopedia of plays and a huge playbook, and routinely came to the press box with about 200 plays to call, and none were scripted. Given that we run about 60-65 a game, you can see most of it went unused.

Thats over-preparation, and the result is an offense that comes out inconsistent because they simply haven't practiced the plays they run the most, they're practicing new plays during game week they may not even use once on Saturday. Football players don't memorize the playbook so much, its too big, they tend to read it once and study it through the season, but concentrate on practice. Repetition and direct coaching is the way they really learn the plays, and if they don't get to rep plays enough, they never know what they're doing on the field. You always hear about coaches saying "we need to simplify things a little" and that is where it comes from....you cant throw too much at an offense.

For example, Mike Leach only runs a handful of plays at Texas Tech, about 30 tops. His playbook would fit in a small notepad. The reason why they do so well with them is because they rep the exact same plays over and over in practice. He doesnt even hand out a playbook to his Quarterback, they read it off their wristband.

"There's two ways to make it more complex for the defense," Leach says. "One is to have a whole bunch of different plays, but that's no good because then the offense experiences as much complexity as the defense. Another is a small number of plays and run it out of lots of different formations. That way, you don't have to teach a guy a new thing to do. You just have to teach him new places to stand."

Swinney says they have shrunk the playbook and retained the terminology, and that he's letting Napier run the offense, now with about 100 plays on gameday-and scripted (which is par for most OCs), but he adds that he may call a play here and there, maybe an entire series.

This is very comforting to me, what about you?