What is Clemson thinking?

Share All sharing options for: What is Clemson thinking?

This is what we see now with all the time, energy, and cash thrown at the West Endzone: 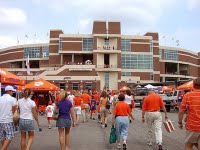 Pretty classy, very modern, and a great place to show recruits that we are serious about football.

Here is what is proposed:

Why would the university not place this eyesore across the street, behind the baseball stadium? Why would it not move it anywhere other than directly in front of the new "centerpiece" of the stadium? Nothing says tradition and excellence like tailgating in a freaking parking garage.

In other news, the former Tiger pro golfers are having a great year. With Glover bringing home a national championship, Trahan, Stanley, and Warren all playing well, CU has gotten a lot of television exposure over the past few weeks. This is great exposure for CU and nice to have well mannered professional athletes representing our school.

There really is not much else going on with the Tigers for another month or so...then the real fun begins.