Now Tammy says he was fired

Share All sharing options for: Now Tammy says he was fired 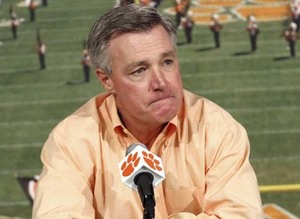 SHOCKER! Finally those of us who knew he was pushed out hear the other side. He spoke at a fundraiser for Univ. of North Alabama, where Terry is now the head coach, along with brother Jeff. I would not be surprised if the great Jack Hines soon joins the staff, but he's not there yet.

"I went to work that morning fully anticipating coaching that day and night," Bowden said. "I had been a head coach for 12 years, and I had always turned it around. Never had a losing season. We were going to spin out of this thing. My offensive line was going to get better. 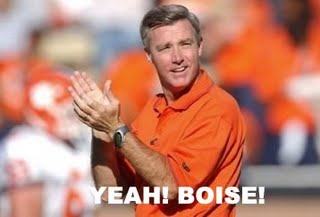 "But understanding the climate, I kind of anticipated the knock (on the door)."
Bowden said when it became apparent he lacked the administration’s support, he agreed to begin negotiating terms of a buyout.

"I’m sure if we had talked longer, I probably could have (stayed a bit longer)," Bowden said. "But at that point in time, Dabo (Swinney) was obviously in their thought process, and we had just finished in the top five in recruiting the year before.

"We were moving into a new facility, had a solid staff and players, momentum was going, they had a guy there (Dabo) they were obviously happy with — to me, it was a smooth transition. You like him, he’s here, staff’s in place, let’s make this as smooth and as painless as possible."

TDP says he stands by his original ocmments, that Bowden put the option of resignation on the table. I'd like to know what he meant by lack of administrative support. TDP put his own neck in the noose with that stupid extension. I don't believe either of them are liars, but Tammy is one to deflect things off himself, we all know that. He didnt have to say the things he said though, he hasnt been derogatory since he left Clemson but chooses to say this now....why?

Maybe Tammy thinks this will wash him of guilt and future employers will forgive and forget that he quit. He couldve stuck around and answered questions when the press conference happened right? (happiest day in my recent memory). Maybe he held some sense of class or tact that is gone now or he just decided it was the time for it, I dont know. I dont think this will win much sympathy from the Sunshine pumpers though.

Larry Williams thinks the same things I do.