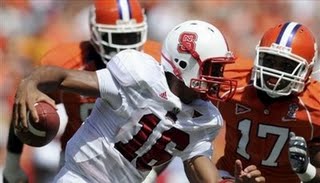 TI and The State report that OLB Buster Hunter has given up football due to his epileptic seizures becoming uncontrollable and not responding to medication.

>"I still haven't really swallowed the pill yet," Hunter said. "I'm just hurting so bad knowing I went from working out, getting ready to play this season and being right in the rotation, to 'I can't play anymore.'

My body has basically been rejecting my medicine," he said. "When that happens, it makes it complicated to live normal."

"They didn't want to take any more chances as far as me being out there on the field and having one, to where it could be dangerous. You can't predict a seizure, when it's coming on. You can't say, 'Well, at 6 o'clock I'm going to have a seizure.'

"It's hard, because you wake up and you see all the pictures on the wall of you playing, and you know you're not going to do it anymore. I've been hurting so bad. But I'm trying to stay positive about everything, trying to keep my head up. That's the most important thing. A lot of people have it worse off than me.

"I honestly believe God is showing me a different way of doing things. This is not what I wanted, but it's what I need."

He will be put on medical redshirt and will serve as a student-assistant this season, overseeing the LBs.

Hunter was in line for a 2nd string position this season and had been praised by Steele several times this offseason, before having to sit out towards the end of spring practice because of his seizures. He led the team in snaps per tackle last season.

Recall Hunter had to sit out most of last spring because of the seizures and a knee injury, and enrolled in January 2008 after working very hard to get his scores up just to get into Clemson after signing in February 2007. Just a few months ago, this article was written on his life and struggles with health and family.