Share All sharing options for: GT: Defending the Run & Shoot

The R&S is quite difficult to defend. Each team that uses it has different characteristics and philosophies. One constant, however, is that the QB is the key. If he can scramble and attack the containment, you have an added element of pressure to the defense. If the option and counter have been included in the packages, its still another element to defend. This article is meant to illustrate a few things you can do to stop it, and to cover a few plays that are staples, I recommend going to SmartFootball. It is an addendum to our article on the option.

Most of what you now call a "pro-style" offense contains elements of the R&S. It may not use the standard 1-back, 4-wide or 3-wide/H-back formation that the Houston Oilers or Atlanta Falcons used to run, but its the same concepts and sometimes the same plays. Clemson's offense is loosely based off the R&S: Rob Spence was a R&S guy at Toledo before they evolved it into what it is now. There are a lot of half rollouts, screens and draw plays designed to hold back the pass rush in our offense, just like the R&S. 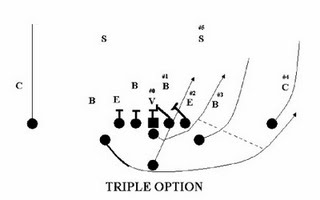 But we know that Paul Johnson has incorporated a chunk of R&S concepts into the GT offense, and since we've covered the root basics of defending the Flex, its now time to look at how to defend the R&S concepts specifically. The role of the H-back in the old Buffalo Bills R&S ("K-Gun") schemes, or the slot men, is now shared by the Wingbacks/TE in the Flex, so its actually a pretty direct carryover into the balanced formation Flex. The only true conflict is in the linemen splits, you want larger splits with the triple option than the R&S, in theory. R&S offenses use a lot of pre-snap motion and QB movement, just like the Flex. Just move your slot men closer to the OL, formation-wise. This type of passing attack can usually easily read Cover 1 and run routes designed to attack it directly, however if you can get pressure on the QB with good coverage you have a very good chance of stopping it.

There are several cornerstone plays used in the R&S that are its hallmark; the Choice, the aceback draw, the +roll, trap, trap option, and aceback screens I'll cover here. These can be put into any offense but I'll cover their defense as if we were playing against the standard Flexbone/Wing-T set with a diveback (the aceback in this terminology), two wingbacks, and 2 wideouts.

QB Sprint-out/Roll out plays
The primary key to stopping the QB sprint roll is to allow the call side LB a free rush once he reads pass. You do not want him to play containment, which might be his responsibility on a pitch option to one of the WBs (the OLBs are usually responsible for the pitch man, recall), but rather have him force the passer in any possible lane from behind. The responsibility of containment is then left to the DE and DT on the back side of the play, and they have to watch for the reverses. However, that DT plays essentially a "spy" responsibility, waiting for the draw, and delays his pass rush.

Additional pressure could come from the DT on the call side or the other OLB, who also has no containment responsibility once he reads pass. The DE on the play side will attempt to loop around the OT and the Wing, and rush directly, in an opposite lane to the blitzing call side OLB, who would be taught to run directly at the OT's outside hip if possible.

The DB's could line up in any way in Cover 1, but its best to hide the alignment and adjust coverage on the fastest WR. Generally in a rollout play, the SS and FS will shift over to the play side of course, following their key. MIKE would have pass coverage on the aceback, man to man, unless he plays to block in which case MIKE becomes the Robber. His other responsibility will be to watch for the Draw or an aceback screen, along with the backside DT.

The problem, of course, is reading pass in the first place. The play side WB will run over the middle to attack the seam, and the backside WB either goes in motion pre-snap to the play side into the slot before running his route, or follows the QB and then runs upfield as a safety valve into the flats.

The trick, so to speak, is that the Wing to the rollout side or the FB are used in the protection scheme in a R&S offense. Their job is to chuck a DE or OLB on the rush, and then run out for screens or safety valve plays a few times per game. This is what forces you to keep a spy (MIKE) in the middle, and reduces your ability to get creative in blitzing those LBs.

To change it up, you may just want the backside OLB to drop into coverage and help the CB once he reads pass. So if the WB to his side goes in motion away, he will just drop back and could become the Robber, looking for crossing routes. That would help against any type of throwback pass or play-action.

The Trap
The Trap/Trap-option is one of the oldest plays in football and before you think its just a Flexbone-gimmick play, read the article and look at the blocking assignments, and you'll see its in just about every kind of two-back offense there is. Basically the trap option is a fake FB Dive to the (non-pulling) Guard/Center hole, the QB does a reverse pivot and runs out for the pitch with the pulling Guard as his lead blocker. The old tried and true Trap is still run in the NFL, and Clemson runs it too. Its a staple, plain and simple. Here is a counter trap against the 4-3. 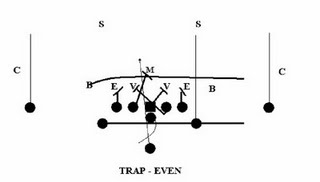 So how do you stop the trap or trap option? Its the same as most option plays. You don't want the QB to run it, so when the play side OLB reads run, he waits for the pitch to the Wing. The DE's themselves HAVE to keep the OT from blocking MIKE, and try to help on the keeper, but it is MIKE who attempts to force the pitch. 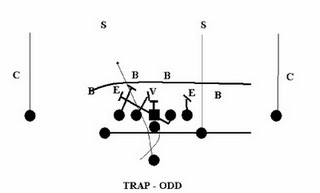 Again, the problem is reading the Trap in the first place, because the DBs will be watching the backfield motion, and it could nearly the same to them as the rollout above because of the criss-crossing Wingbacks. Thats how your SS comes up to support the pitch and gets toasted by the WB running right by him. The linebackers and linemen are the ones who'll notice the pulling guard, your safety might not.

The Aceback Draw
The back side DT and MLB have the major roles in stopping the draw play. They both have spy responsibility as I stated above. This really isnt a big deal for MIKE because he's already supposed to pick up the aceback, but the DT can get confused easily because it's harder for him to see the flow-to or away with a big lineman in his face. 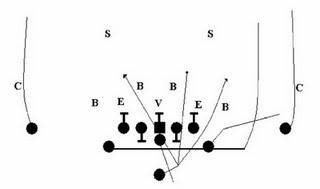 The Aceback screen
To defense this common and difficult play, you would like to double-cover the ace with OLBs and the MLB. The OLB on the play side of the QB rollout above starts his pressure upfield to blitz and then reads the FB setting up for a screen. Now he is in position to be behind the blocking linemen going upfield. At the same time, MIKE, who is supposed to spy the FB, allows double cover, so both MIKE and the OLB converge on the FB from different directions.

The Choice/Go/Switch/Seam read plays
Well you could write dozens of articles on defending this by itself, and I can't hope to do justice to it. Smartfootball has dozens of articles on the specific concepts of the R&S passing game, and the fact that the WR adjusts on the fly means that blanket statements about defensive coverages by myself (or anyone else) tend to look stupid. This type of route is basically like backyard football: the WR reads the defense while running, and then the route changes based on it. What might be a quick-in or hitch under Cover 2 can become a Go pattern if he reads Cover 3 during his initial 10-15 yard run. This type of route is generally run by the slot man, likely the WB in the Flex, while the outside split-end/flanker run their called routes in the huddle. Its a fundamental of the R&S offense, but its harder to defend against it specifically.

This is the Dive Choice, a hybrid play-action play, well suited to any situation where the defense expects a standard triple-option play. 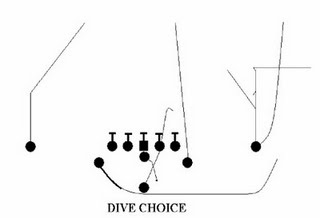 In this play the SE has the choice. If the CB plays inside leverage, he runs a sprint out; if he presses up, a fade route; if outside leverage, a short slant; if a cushion, a hitch. This can be decided in the huddle or pre-snap, which is likely going to be the case unless you have experienced WRs/QB who can make the adjustment on the fly.

Enter the zone blitz. This is really the best bet to stop these plays, because you will either need good man-to-man coverage by the LBs or one of the safeties to beat a slot wideout when you face this play when you're in Cover 1 Robber. So, there is really not much specific in the way of coverage that you do differently against these teams. We'll be a Cover 1/3 team and thats not going to change for the spread or the option. In the week leading up to an opponent who runs such a play, you would go into pattern reading so the DB's can anticipate where a WR will attack, given that they know the coverage they are playing.

Recall this offense uses 6 men in protection schemes, for the most part. If you blitz a LB towards that blocking RB, and drop a lineman into coverage underneath, you create a mismatch. The RB won't be able to handle a fast LB for very long, and you can force the sack or a rushed throw into coverage. Here I'll just showcase the plays without commentary, notice how the routes change for a particular receiver as the coverage changes, to attack the seams in the defense. Cover 3's seams are the hashmarks, or the area between the Middle Deep man (FS) and the Outside Deep man (a Corner usually). Cover 2 is directly between the split safeties, and in Cover 0 (pure man) or Cover 1 (man with a FS playing deep) you would preferably run away from the middle or force defenders to choose who to cover by crossing your routes.

The Switch in a Flexbone: 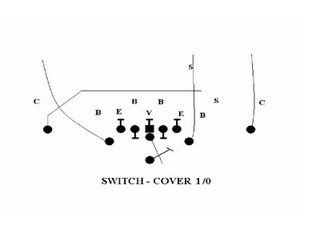 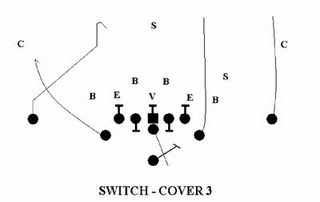 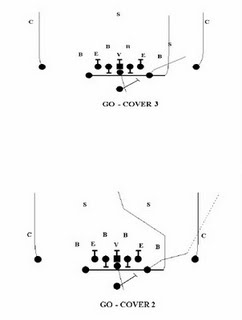