Share All sharing options for: DT blows doesnt it 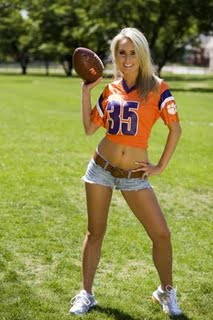 THE HORROR
-Erin Andrews was smacked in the chin by a line drive during a recent ESPN baseball telecast, sending millions of us into an anxiety attack. Dr. Saturday writes about it here. Erin should stick to football, and taking other things on the chin.

-Upstate today's writer Steven Bradley has made his first 3 picks for this upcoming season. He picks us to go 2-1, losing to GT.

-Independent Mail (Anderson) ranks the ACC's best coaches. Dabo is picked #11 of 12, which is clearly understandable, we'll see after this year where he belongs. I might not put Paul Johnson so high, but he should be up there.

-The Strength staff is really impressed with Korn's progress this summer, and has performed extra QB-specific rehab work on top of the summer session drills and workouts. Dabo has asked Kyle Parker to skip the first summer session of workouts since baseball finished, and he's now working with the team in the 2nd session.

-The whiny bitch Cullen Harper has quit football, after an unsuccessful attempt to join Buffalo. He has not decided what he wants to do, and will choose either medicine or the Law. He had a choice to play in Canada, but declined. Remember he was talked about as being a 1st-2nd round pick over a year ago? Should've kept your mouth shut Cullen.

P&C has an article up on the expectations of CJ Spiller going into this season, and looks at the rundown of the ACC's best offensive players this year.

I really dont think Russell Wilson is going to have some phenomenal year, but he will be solid like Tom O'Brien's players usually are. Demaryius Thomas (GT WR) I dont know about, the Flex will have to throw a little more this year but I have a hard time seeing any GT WR putting up huge numbers in that scheme. Theres alot of players in that list I'd move way up as well.

-This article from The State talks about Clemson's baseball draftees and it looks like we will be losing Dwyer, which is really unfortunate. Ben Paulsen has decided to leave, which was expected.

-Charlotte Observer lists the ACC's Top 20 most powerful people. Do you see any Clemson guys on the list? This is all politics. Where the fuck is Ron Cherry anyway?

-Will the Cluckers be better? I dont see the Curse on this list, that should always be #1. They'll never figure this shit out.

-Smartfootball takes a look at SOS's offense in the NFL and why it failed. Its a good primer on offense in general, and its wise to point out that the reason its not working at Sakerlina isn't that the scheme is bad, its his players and coaching......and Ben.