Frank Spaziani has been the defensive coordinator at BC for about a decade now, and was in the CFL immediately before that, and prior experience was under George Welsh at UVA. In 2008, the Eagles ranked in the top 10 in the nation in seven defensive categories, including interceptions (first, 26); turnovers gained (second, 36); total defense (fifth, 268.14 ypg.); red zone defense (sixth, 72%); first downs allowed (sixth, 14.71 pg.); rushing defense (seventh, 91.2 ypg.), and pass efficiency defense (98.81). In addition, junior linebacker Mark Herzlich was named ACC Defensive Player of the Year.

Now you can certainly believe that BC has been good the last few years because of Matt Ryan and had made a great decision to hire Coach Jagz in the first place, but you have to admit they were very consistent, if not flashy, under Tom O'Brien before that, and alot of it is because they play good fundamentally.

For the most part, Spaziani is a read-and-react type of guy, and the 3-5-3 Defend is one of his gimmick defenses that you'll see alot of in definite passing situations. Now he's the head coach at BC, and while I don't expect them to go to the ACCCG again soon, they will probably still be a tough opponent for years to come. This article makes use of one of his published articles on the 3-5-3 defense, which is suited as a base package against teams with alot of underneath patterns, with 5-step drop protections (like Clemson). Its also a good package to run in the Red Zone.

With the emergence of complex passing games in college football, defensive schemes have had to adjust to keep pace. It used to be that you would either play back and react, or that you'd apply pressure. But nowadays, the packages must have enough variety to meet all contingencies. They have to have been installed and practiced in the game week, or you'll lose against a good opponent. A pressure package is essential, but the variety is the real key to success. You dont want your defense to look the same to the offense as what they practiced that week, so you always try to hide coverages and blitz packages.

The biggest liability of the 3-5-3 is obviously the pass rush, and vertial stretch (which Clemson DOESNT do enough of), so BC expects the 8-man coverage itself to be the timing breaker, and the DL can get a coverage sack. BC uses LARGE DTs, and they arent expected to be very fast, just disciplined (this is also why they'll handle GT's FB Dive well). The two Tackles and the NG are in containment rush, both trying to go around the OT's and force the pocket to collapse around the QB to get the sack. The NG himself must be a walrus who can take a double-team, and is the man responsible for screens and draw plays. 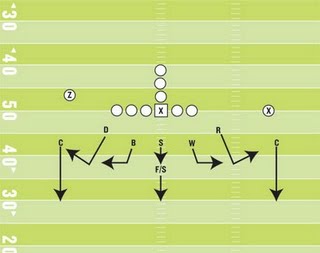 The basic package appears as a variation on the 33 Stackset with an extra OLB/Nickelback playing, with the SS being the 5th guy in the underneath zone. BC's base is still a 4-3. WILL and SS take the flats underneath, with the two interior LBs playing hook/curl zone and the SAM taking a slot/TE (curl) zone up the seam (note that it could also appear as a shifted 4-3, with the Sam playing in a 3pt stance). The two CBs and the FS are playing the usual 3-deep zone coverage. In the figure above, W, S, and B are LB's (Will/Sam/Bandit), and the SS's are called "Dogs" on the callside, "Rover" on the weakside. One of them will most likely be a OLB or backup Safety/Nickel. Its just terminology.

Simple adjustments
When field position doesnt give help to protect against deep stretch plays, the first adjustment Spaziani makes is to swing out his WLB and SS to match up across from the two WRs. In this "out" adjustment, they are told to bump the wideouts and throw off the timing so that they cant get past the 3-deep or into the seam before the pass rush can do something.

A second adjustment is simply to switch SAM and SS's responsibilities, with SAM taking the flat (and possibly lining up across from the WR) and the SS running back into the slot zone. Why does that help at all? Well first it helps control the seam better by giving another look to the QB (remember they attack the seam against a 3-deep), and second the SS is a better pass defender than SAM or the Strongside End. 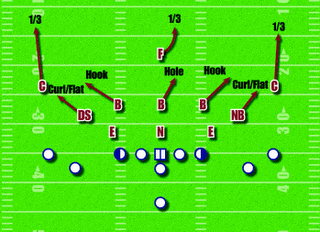 So the 3-5-3 allows BC to defend 5 underneath zones, and helps cover an additional spot on the wide side of the field. However, pass offenses don't quite work that way and if you chart plays you'll see they tend to work from the TE over. This forces other adjustments unless the offenses are designed to attack that area with the extra defender underneath.

The next adjustment you'll often see them make is an Umbrella-look, which might appear as a 2/4-deep to the QB in presnap reads. The weakside CB will roll over, standing opposite the FS in a 2-deep style coverage, but with the Strongside CB coming up a little, and the SS matched across from a WR, it could also fool the QB into thinking all 4 will drop back deep. Spaziani will call for rolling coverages after the snap to trick the offense into a presnap adjustment from this look, disguising the true coverage.

A simple strongside roll will drop that SS, umbrella-CB (taking the deep middle), and FS into 3-deep, with the other players taking the underneath zones. The other CB can either play soft or bump & cover the flat zone underneath.

On the hash, it would be better to roll weak, saturating the zones that the offense will try to attack and disrupting the patterns. You want to bump with the SS and not allow them to attack the seams through the slot, and that means the Split-end will be forced to read 2 or 3-deep and adjust. The major weakness is the front-side out, and you can really nail BC with that play if they are rolling weak.

Note that with only 3 guys definitely coming at the QB, you have alot of flexibiliity in the fronts you show with this defense, and you can technically blitz from anywhere and not really be losing anything. In this figure you see the OLB/Dog stunting, then he comes on the blitz, and that is easily changed to the other Dog or a LB. 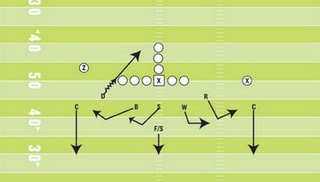 A standard 3-deep from a 4-3 set would be no different in coverage than a 3-5-3 blitzing one of the underneath backers. If you ever blitz out of it, then from that point onwards the offense doesnt know where the blitz could come from. Its solid against the run because its a Gap-8 (33 Stack) scheme, so all the guys have particular gap responsibilities to control.

In the base defense the nose will have one "A" gap and the MLB will have the other "A" gap, depending on the blocking scheme.

Of course there are no ends to the adjustments made to the fronts based on personnel and plays the offense are good at, but this is intended just as an introduction and primer to one of BC's better defenses. They don't play the 3-5-3 often, but you will see it against Clemson in definite passing situations.