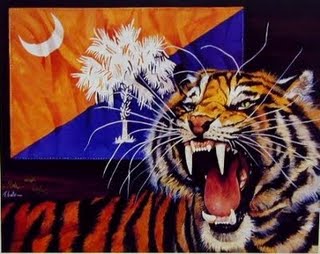 There have been an unusual amount of stupid posts (at least for DT) on TardNet the last few weeks about the 2010 recruiting class, so we decided to take a closer look at what we've got so far committed and some of our best shots for the 2010 class that might still be out there. I don't like to spend a considerable amount of time worrying about 18 year old kids and their whims, but it should be covered ever so often.

Most posters complain that we haven't brought in the talent, because they pay too much attention to a player's Scout or Rivals star rating. Its been commented on in the past, by a former Clucker assistant, that a player's rating can be influenced by the comments of any particular coach. If Steve Spurrier or Urban Meyer want him, then you would see a 2-star guy go to 3-stars, because clearly he's wanted, so he must be good. It works in the opposite sense as well. You think a school like TCU or Utah would get a 4-star guy who's on the board at USC, Texas, or Alabama? No, not likely. Its also been admitted, by Ard himself, that a player's star rating also can be affected by when he commits to a school. The earlier he does, the less time the services spend re-evaluating and re-ranking him. But its still a measuring stick, because height/weight/speed don't always show you how good (or bad) a player is. All the ratings I use to describe a player below are Rivals ratings.

Lets think about who we've got on staff before we go criticizing the coaches for going for lesser talented players. Dan Brooks, Woody McCorvey, Fat Brad, Charlie Harbison, Billy Napier, and Kevin Steele have all been highly ranked by Rivals for their prowess at bringing in talent over the years. Given the players that Chris Rumph has been pulling in, I think it will not be long at all before you see his name among the best recruiters in the southeast. Jeff Scott got us Bryant McNeal and is our current recruiting coordinator, but we'll hold off on his evaluation. Dabo Swinney may not be able to recruit as efficiently as the Head Coach now, because of rules regarding contact between the HC and player that are stricter than assistants, but we know he is good at it, and if he can close like Bowden did then we'll be perfectly fine. And just to point out for the nitwits, any offer to a player must be approved by the position coach and then Swinney before the offer goes out by the recruiter (any player in a given region is recruited by a single coach, regardless of whether its his position coach).

Lets look at the biggest questions for 2010:

How big is the 2010 class going to be?
Scholarship breakdowns for 2010 show we're going to have around 22 to give. Last January, Swinney commented that the 2010 class would be about 20 total, but we didn't close on a couple guys, and that freed up a scholarship for a few walk-on players, notably Terrance Ashe. In most interviews since signing day, Scott, Napier, and Swinney have stated the common number of 22. It may turn out that we sign 25, due to grade factors and SATs, but we should aim to bring in 22 players.

Rules prevent bringing in more than 25 new players next Fall, and no more than 85 total on a football scholarship, so thats the cap. Players that go on scholarship the next January (grayshirts) are one way around this rule, but we have rarely used it more than once per year. If you are wondering how UNC or Alabama get around the rules, and sign 30+, this is part of it.

What are our biggest needs?
No question we have depth needs at Safety, LB, and DT. We have good players at LB, but they are young, maybe too young for 2009. DT needs more numbers period.

Offensively, we have great players at WR, but they are all young and have to step up. Also, you always have to bring in linemen every season. We have depth problems at T for now, and Thomas and Jay shored that up some, and Jay will not redshirt, but an injury to Hairston will show you what state our line is really in (see FSU last year).

Hopkins and Bryant are Rivals100 guys, and although Hopkins plays both ways, he is being recruited as a WR. Joe Craig (Rivals250) plays QB at Gaffney, and our offense does not "go" anywhere without him running it unfortunately. Given that people at Gaffney rarely play both ways, I don't see how he's going to play S at Clemson, so he'll almost assuredly be playing WR. Thats 3 Wideouts for 2010. All 3 are rated well, so you'd have to give credit to the coaches here.

Sam Cooper might be a filler at first glance, but he's big and tall, so we'll see. Ethan Farmer (#12 TE) is impressed with Dan Brooks. We certainly needed one true TE for the last class. Keenan Allen is the biggest prospect on the board (#5 ATH), and could play TE or WR at Clemson, right now we stand at #3 on his short list. Kadron Boone (#20 WR) wants to play at Florida, but if they are finished at WR, we have a shot to get him. We thought we needed at least one more WR in last year's group, and the staff appears to be doing well in filling needs here. I think we're going to be thrilled with the WR signees.

After last signing day, we mentioned we would need at least 2 corners in the 2010 class. Martin Jenkins, who is not rated high, is likely a sleeper at Corner. But at 4.35 40', I dont see a problem. Given that we expect the commitments of Darius Robinson and Garry Peters (CB, both 6' 170, both 4-star), and that Breeland was recruited as a Corner, we'd be full at the position with 4 if those two come through.

Should both Robinson and Peters come to CU, Breeland will likely get moved to Safety to start out. Desmond Brown is already slated for safety, and M. Gilchrist will see some cross-training at the position this month. We would be alright at safety, assuming these things work out, but we still need at least one more true safety prospect. David Amerson (#17 FS) is the last big safety on the board, and is still interested in a visit, we're in his Top 4.

Ricky Chaney plays more of a SS position in HS, but is being recruited as a SAM or WILL for Clemson. He has the speed to play either, but will have to bulk up and get much stronger to play. Chris McCain has showed some interest, but apparently has not been offered. Christian Jones and LaDarius Owens (both 4 stars) are in the mix, but it seems to me that Owens is really the only shot.

Jake Nicolopulos is rated #26 at Inside LB, and he's likely a good one to have. If you took the time to review the star ratings, you'd see they ration them out in a complicated way, and that there are only 7 4/5 star players at MLB nationally, 22 for OLB. Justin Parker is the best in the state, and #6 nationally, but SC leads for his services currently. #1 overall MLB Jeff Luc, of Florida, is being recruited by Steele, but its an outside shot against the likes of FSU and UF, and a teammate of his went to UGA so they are also in the mix....he did visit us, but expect FSU to be the team to beat. #21 Ferlando Bohanna is still considering us, and is being recruited by Brooks.

Frankly I am a bit surprised we aren't doing better at LB, particularly compared to DB, even if its early. With Hunter out, likely forever, we will need another. We have the talent at LB on the team now, but they are young. I'd still like to see us get a big name, just to make the splash, its been too long since Clemson pulled in some of the greatest LBs in the country.

Along the OL, you have to anticipate needs 2 years ahead of time and bring in players every season. Austin, Humphries and Lambert will be gone in 2010: two guards and a tackle. Medlin will be out of the rotation due to a medical hardship. We have several young Guards already, and depth at Tackle will be a problem still for this year should we have an injury. Brandon Thomas is already likely bound for a redshirt (knee), J.K. Jay is not. The staff has commented on signing 3-5 linemen for 2010, and we've started out pretty well with Beasley, Webster, and Davis. Davis is so big he could play both positions but listed at Guard (#26 nationally), Webster is a Tackle in HS, Beasley is a Guard (#27). Dan Koenig is probably our highest rated prospect who is uncommitted so far (#58 OT) and we're in his top group, likewise for Max Garcia (#63 OT) (both 3 stars). Losing out on Eric Mack and A.J. Cann to SC really dwindles our prospects to add any more big name guys up front. I still think we need another Tackle to compliment Webster (who will RS, too skinny) and Davis.

Corey Crawford is our first DE commit so far, but there are several DL still out there. We really don't have depth problems at End, but you'd like to take a couple if youre shooting for 22 signees, because the same argument as OL applies. It seems though that we're not on anyone's short list at weakside, unless of course we steal someone away. I don't see us getting Brandon Willis from Byrnes, and the other top guys on the board are leaning in other directions.

At DT, where we need them the most, we don't have anything. It doesnt look fantastic either, but we could sign a couple 3-star guys. With Dan Brooks coaching them, I'm not ready to hit the panic button.

We'll need a RB to replace CJ Spiller, but dont hold your breath on Marcus Lattimore. Jawan Jamison seems to be the scatback type, and is high on us. Mustafa Greene from Irmo is another highly-rated prospect. I saw him in person and was not impressed, however. There are a few others on the board but I'm not worried about our RB corps. I'm not even going to cover QBs, if we have problems at that position then we're in deep shit.

All in all, I think youre going to come away from 2010 with a "solid, but not spectacular" impression, kind of like 2009....but with a few decommits from other schools, and some luck, it could very well turn out spectacular.