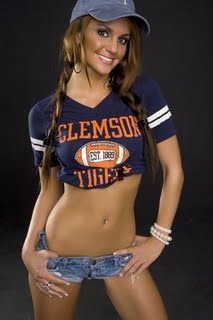 Clemson picked up a huge basketball commitment from Noel Johnson, who picked us over LSU, Xavier, Charlotte, and UNLV after being released from Southern Cal.

Johnson told the AJC that, besides academics, he was drawn to Clemson by its "winning tradition." At the same time, he said, "They seem to die at the end of the season. I’m trying to be that missing piece."

Johnson is 6'7" and likely will play 2 or 3 position here. He's rated #30 in the ESPNU 100, and the #11 Small Forward by Rivals (4-star). He'll sign this week (we're in the spring signing period) and will enroll this week in the short summer session classes.

We pulled in another OL in Reid Webster (6'5" 270), and he was only offered last week during Camp. He has offers from FSU, Ole Piss, and Miami, but has no star-rating by Rivals yet (which means its likely a 3-star from them, but who cares if his offers are from good schools). He's slated for Tackle, and will likely have to bulk up to play it in college every week, so don't be surprised if he starts at Guard. This is our 7th commitment, out of a likely 20-22 total.

Just to note: B. Breeland is recruited as a DB/S, Ricky Chaney as a LB/SS type, DeAndre Hopkins is on the board at WR at the moment, which is where he would prefer to be.

South Pointe (Rock Hill) C Jacob McQueen is really enamored with us, and even if we dont offer him I'm sure he'd try to walk-on. I really do wish we could get back to the old walk-on tradition we were getting in the '80s. If he's being recruited as a Center, I'm not sure they'll take him, what we will be needing in two years is Tackles, but I like what he had to say:

"I’m about 50/50 on run blocking and pass blocking," McQueen said. "But, I like run blocking because I get to smack people in the mouth."

Tajh Boyd has been on campus and rehabbing his knee, and believes he will get a legitimate shot in training camp in just a few weeks. I've really wondered all along that if he doesn't get this job within two years, that he will transfer somewhere else to play. Ideally you would like to RS him and hedge your bets against injury to Korn/Parker or Parker choosing MLB in next year's draft. The hard fact is that one of those two will almost certainly lock down the starting job by the end of this coming season, and Boyd will be RS'd. If Korn or Parker doesn't, then it will have been an AWFUL year, and we all know that. I fear that once Boyd sees that, he may look elsewhere, perhaps not next January (2010) but certainly in 2011 if he feels he's not getting an opportunity to showcase his talent.

Dabo did an interview with the P&C recently about installing a winning attitude at Clemson that hadn't been here. Dabo continues to show me he has the right idea, but what we really want to hear is what the old teams used to say about Danny: That Saturdays were easy compared to practice. I thought this was encouraging along those lines...

The other thing we did is had about 1,100 competitive reps (in spring) — good on good — which is fantastic, so it was extremely competitive. (Tracking the competitive practice reps) is something Kevin Steele brought. He said they probably had 900 at Alabama last spring. He was blown away with the amount of competitive reps we got. I can tell you we didn't have near that many competitive reps last year. That's a result of tempo and how we structure practice.

I don't know about you but when I hear things like that, I go from thinking we'll win 7-8 games to believing we'll win 10 games. Its hard to keep my usual cynicism about Clemson football.

Southern Pigskin previews the upcoming season in the ACC here. Justifiably, FSU is picked #1, but us #2 in the Division.

Final thought – A lot will depend on the play at quarterback. With Spiller, Ford and a strong offensive line, Clemson doesn’t need a game-changer. The Tigers can’t have inconsistency and mistakes, either. This is a team with a lot of potential.

The SID reviews the 2008-2009 year in athletics. All sounds good when you look at how Bourret piles up the stats doesnt it?

- Clemson played in a bowl game, the NCAA men's basketball tournament, and the NCAA baseball tournament for the first time since the 1997-98 academic year and for just the eighth time in school history.
- Clemson was one of 13 schools to compete in a bowl game, NCAA Tournament baseball game, and NCAA Tournament basketball game during the 2008-09 academic year.

Oh and Steve is bitching about us telling recruits about the horrible run-ins with SLED in Columbia....