Share All sharing options for: Tigers advance to Super Regionals! 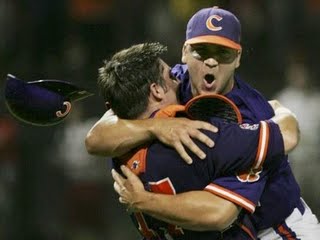 Clemson pulled off a small miracle in the 7th and 8th innings, coming back from a 5-1 deficit they dug for themselves, to beat Oklahoma State 6-5 monday night. We advance to the Super Regionals against Arizona State in Tempe, AZ next weekend. Matt Vaughn got the win with 3 2/3 innings of relief, striking out the last man on 3 missed swings with 2 men on base.

Chris Epps got Tournament MVP for the weekend series, hitting .526.

Clemson got down early 3-0 before a Mike Freeman RBI triple made it 3-1 in the 5th, scoring Epps who had just doubled.

But in the 7th, what I predicted after the ACC Tourney happened: the defense came apart. None of it was the fault of Vaughn. A routine grounder to third was airmailed over (1B) Paulsen's head by Matt Sanders, putting a runner at 2nd. Then Jeff Schaus either didnt see the ball or took his eyes off it, as the ball bounced right out of his glove in Left, and then Ben Paulsen took a grounder about 6 steps from 1B and threw to 2nd, which went wide left and into LF. It was a complete meltdown to put OK State up 5-1. Had Vaughn not induced a lineout into a double play, it wouldve been worse.

Thankfully Oklahoma State gave one back to us, throwing wide to 1st and putting the first runner (Sanders) on base, with 2 out already. Chris Epps slammed one over the LF wall to make it 5-3. Freeman then came up and doubled down the RF line, and Schaus made up for his mistake with an RBI single to make it 5-4.

In the bottom of the 8th, Ben Paulsen led off and got on base, but then Wilson Boyd struck out and Brad Miller lined out in the infield. Catcher John Nester came up and saved us, with a 2B, putting both runners in scoring position for Kyle Parker.

Oklahoma State went to their closer McCurry, with 10 saves and a 2.45 ERA. With Parker 1-for-10 and in a 17-for-96 slump, I only hoped he would hit a quick grounder to the left side and run out a throw, but he pulled off the clutch hit and both runners came home to make it 6-5.

"You are definitely just in the moment," Parker said later. "It is just exciting that we got the lead and ended up winning. I have been feeling comfortable; it’s just that things haven’t been happening for me. That is how baseball is."

Vaughn, true to form, made it interesting in the 9th, pulled it out.

Now it's off to Arizona State and meeting with their ace, a certain first-round pick in Mike Leake who is 15-1 with a 1.23 ERA, striking out 143 batters in 124 innings, while walking just 20.

Oh yeah, and the Cluckers lost to ECU in 10, so it was a perfect day.