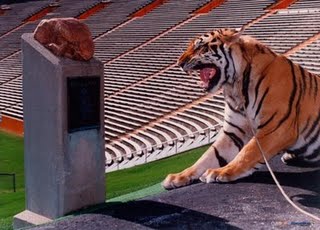 -Kickoff has been set for the first three games by the ACC.

MTSU-6pm
@GT-7:30pm, kinda already knew that one though, its a thursday night.
BC-Nooner....hot damn. Are you as excited?

-What the hell? Did you see this? 2nd in the conference on talent maybe...

2. Clemson - All five starters return for the Tigers. Like FSU, an inexperienced line from a year ago will now be loaded with veterans. The leader is without question versatile guard Thomas Austin. The polished senior has played center and guard for Clemson and anchors the Tiger ground game. Expect running back C.J. Spiller to follow his lead. Junior Chris Hairston is emerging as a premier tackle on the edge and sophomore guard Antoine McClain progressed quite well in his first season.

-Preseason Athlon magazines are out, Clemson picked 30th nationally, 3rd in the Division behind FSU and NC State. I will say that O'Brien has proven to us several times that he's a good coach and NCSU did have discipline problems under the Chest that this man has fixed, but I just don't quite think they are there yet. With the way they finished down the stretch however, its understandable where this rating comes from.

-Tomahawk Nation believes the smart money in Vegas is on Clemson to win the conference.

-There have been some interesting articles come up lately about drama within the athletic department. TDP brought an assistant with him from Arkansas to Oklahoma State and then here; Katie Hill, now our Senior Associate AD for Internal Affairs and CFO for the AD. Basically she is the money person who runs the finances of the department, and since you have to have a "no" person doing that job, she's rubbed people the wrong way. She's been integral in financing the whole WEZ project and has worked to keep us in the black while still improving facilities and doubling Vickery's budget.

But basically the various coaches think she's a bitch, and don't like that she questions them or uses foul language. Thats the impression I'm getting. What seems to make it worse is that TDP lets her run the show while he sits on the sidelines.

Combined with the financial situation we're going through right now, losing Verizon and Bi-Lo sponsorships to the tune of a couple million, as well as 12% reduction in season tickets (another couple million), and that there are so few conference titles coming lately the morale in the Athletic Dept. seems low.

With the SEC signing this huge contract with ESPN (who will now suck off the conference even moreso than usual) and CBS, their schools are getting $7-9 million individually...equivalent to what they'd get as a BCS payout. SC will still fuck it up but just look at the coaching salaries at Tennessee.

TDP mentioned that he would stay here as long as he enjoys it, and we have success. I'm sure he'll be here until Dabo is established, but probably not much longer.

Phase III of the WEZ construction will have to wait with these financial losses. This last step is to include some things to make it prettier and a museum on Clemson history, likely a joint adventure with the University.