Share All sharing options for: Danny Ford for Governor

Its pretty obvious our current one is a dumbass, so lets get one who will inspire fear to all those entering the state, lets vote for Danny Ford.

Its about time we had another beer-chugging, chaw-spewing Governor. I dont care if he's a republican or a democrat, I know he's not stupid.

He even looks the part when he wants to... 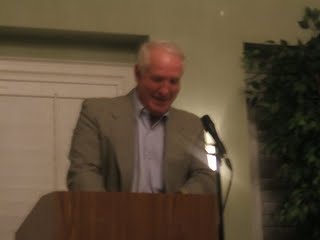 News and links...
Strelow ranks the ACC QBs and its hard to really argue with most of it after the first 2, just based on performance last year. I'd move Ponder up to 4 or 5 though, and I suspect he's going to have a season on par with Danny Kannell's in Tallahassee after another year of Jimbo Fisher's tutelage. Its possible that T. Lewis will do much better for Puke, but they still dont have enough weapons to get past a low-tier bowl game.

Will Korn spoke with Heather Dinich about his hiring of QB coach Jerry Rhome to improve his throwing motion this offseason. Apparently Rhome thinks he has improved:

"With NCAA rules, I couldn't work with coach Napier or any of my coaches at Clemson, so I just wanted to get an extra set of eyes on me, someone who could coach me and help me out," Korn said.

"We really didn't have to spend a whole lot of time correcting stuff when I went down there because I worked so hard on it with my dad and my dad would tape me throw so I could go back to the house and watch it and see what I need to correct," Korn said. "It improved a ton before I even got down there to work with coach Rhome. He was excited to see my release had gotten quicker and shorter and it wasn't so long and I was getting the ball out of my hands pretty quickly. It just gave me a lot of confidence for a guy with his experience and his knowledge of the game to look at me and say, 'You're throwing fine, your mechanics look good,' two weeks after the spring game. It gave me a lot of confidence."

Athlon has a piece on the GT triple option to complement our last post here. As does SmartFootball. The New York Times previews Wake Forest's upcoming season here.

Remember the SC coaches saying they could inflate a guy's Rivals star rating? Well it looks like Miami was recruiting solely based on that. UNC managed to yet again clear enough scholarships to fit their bloated signing class.

Another article on what the Fridge has gone through lately, and just being a larger-than-life character in Aiken and in the minds of Clemson fans.