Share All sharing options for: Regional wrapup, one game left to go 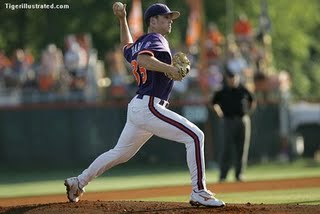 Clemson won Game 1 against Tennessee Tech 5-4 Friday night, beating their best pitcher, coming back in the 9th trailing 4-3. Delk didnt start well and was chased from the game in the 5th with it 4-1, and then Graham Stoneburner came in and shut TTech down with 4.2 innings of 2-hit relief til we could come back.

Game 2 didnt go so well against Oklahoma State, as we lost the pitching duel between Casey Harman and Andrew Oliver 3-2. Again we had a defensive lapse that cost us when Medchill’s eighth-inning single off 1B Ben Paulsen’s glove provided the winning run.

"That was a tough loss for us," Clemson head coach Jack Leggett said. "Casey pitched a heck of a ballgame. We have to come back tomorrow, put this one behind us, try and win the first one, and try and win from here on out."

Larry Williams interviewed Leggett in the post-game and writes about the poor hitting performance here, but I would say that Oliver is likely going to be a 1st or 2nd round pick in the MLB Draft a couple weeks from now.

Oklahoma State and TTech conspired to eliminate Alabama before we even had to play them.

On Sunday afternoon, Clemson eliminated TTech 10-0 behind Scott Weisman's 8-innings of shutout ball. Later, we saved our necks from elimination by Oklahoma State behind Chris Dwyer and pounded them 15-1. Kyle Parker was benched before the game because of poor production, his average has steadily declined down the stretch. In the past 17 games before Sunday’s nightcap, Parker went 16-for-87 (.184) with two home runs and six RBIs. That after pounding 10 homers in Clemson’s opening 42 games.

Tonights winner in the rubber game at 7pm will go to Arizona State, who won their Regional final over Oral Roberts for the Super Regional. The chickens face a similar fate tonight against ECU, for the right to play at UNC next weekend.

From the rest of the ACC, Florida State, Virginia, and North Carolina have made it to the Super Regional round. The SEC has sent Florida (former clemson pitching coach Kevin O'Sullivan), LSU, and Arkansas to the next round, with Vandy, Ole Piss and USuC still in it until tonight's final matchups.

"I believe this is one of the few times when a first-time team has won a national championship," Clemson coach Richard Ruggieri said.

Tajh Boyd's family has moved to the area to watch him play. Not much as been written about his brother but you can bet he'll get an offer when that time comes.

David Cutcliffe has dismissed former starting QB Zack Asack from the Duke football team, though he had been moved to safety.

The SEC has moved to limit the signing of players in February to 28, the only other major conference with a similar rule is the Big Ten. Just to restate the rule, when you sign 25 players and 5 of them enroll for the Spring semester of classes, like say Malliciah Goodman or J.K. Jay did this year, their signing counts towards the 2008 class. Rivals or Scout rates them in with the 2009 class. The rules only state that no more than 85 can be on a football scholarship, and only 25 new players on scholarship in fall semester.