And thats all they are, because overanalyzing the spring game and breaking down each drive is a complete time waster. It is televised, and it is not like other teams don't watch it.
We think its important to just look at the overall performance during the scrimmage game and not focus on specifics. The impressions you have of the spring game generally tell you what is going to happen early in the season. 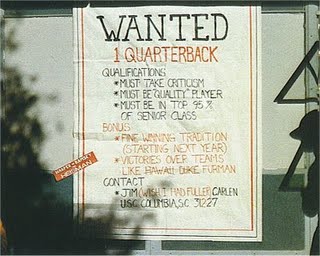 Kyle Parker looked very good, Willy Korn did not look so awesome, Wade showed why he is still 3rd team. Parker throws bullets, and if he can get touch on some passes he's definitely locked the starting job up. Korn's INT late in the 4th was just a poor throw behind the WR, and had it been on the money it wouldve been a TD because the DB was 2 steps behind him. Otherwise it was a great drive by Korn, and he did make some great throws throughout the day.

I honestly don't see how, if we played tomorrow, that Parker isnt the starter.

But what will TNet do should WILLY KORN not be named starter? It could collapse when the hot air is released.....possibly worse than when Sakerlina tried that whole "blackout" shit and got demolished, and FGF went batshit.

RB & OL:
The white team ran the ball fairly well, but blocking was par on passing attempts for both teams. The starting 5 was split between the two teams, so don't be terribly quick to judge. I think Korn ended up with 3 of them though. Ellington ran hard, but I think Harper could've done better than he did. Rendrick Taylor actually looked good running, healthy for once. Hopefully he wont break a pinky finger and be out 6 weeks this fall.

Redzone offense needs some work, and thats where your OL and running game counts the most.

I wish CJ and Jacoby had been in there. They should be in there Dabo, even if its limited action. The rest of the WRs looked ok but thats harder to judge on a TV screen.

Defense:
They looked confused about their assignment at LB a couple times, but otherwise the schemes they played were the ones I have written about here. There were alot of key blitz calls, Cover 1, Cover 3 and zone blitzes. Cover 1 (or man/man) is what is played behind the key blitz usually.

The pressure with the front 4 looked good to me, Kevin Alexander and Andre Branch had good days.

I think the rest of the pass defense will improve as they continue to learn to play more man coverage, but I wasn't impressed with them today. It was simply bad coverage sometimes. The CSS camera angle was wide enough that you could see exactly what they were playing schemewise.

I honestly think it will take 2 years to install the complete scheme, and teach pattern-recognition, so while we did bring back 8 starters on defense, I don't expect us to improve statistically as a defense this year. Sacks and TFLs yes, but not so sure about the rest. Perhaps we'll stay in the Top 25, but I'm leaning towards a bit lower. TCU will be the first real test, their QB has thrown for 2000+ yards each of the last two years.