Inside the Steele Curtain: Robber

Share All sharing options for: Inside the Steele Curtain: Robber

This will be the most common coverage Clemson plays this year, its versatile because you can blitz easily and not change assignments of everyone, particularly depending on what a LB's key is (which RB he watches, for example) he can blitz any formation from any front call. In other terminologies you'll hear it called "Man-free" or Cover 1 Man. Its something that VK never ran much of, but Saban/Steele have always used wherever they've been.

Cover 1 as a term by itself means only one thing: one deep safety playing zone, who is responsible as deep help across the whole field on any deep route. The most common variation, used by essentially everyone from high school to NFL, is called "Robber." Smartfootball has already given a good primer on this type of defense, but I'm going to rehash most of it here.

What does "robber" mean? Well essentially there is one man who isn't matched up man/man on someone over the middle, and he backs up and plays a zone coverage (around 10 yards deep) meant to 'rob' any crossing routes that spread teams like to use (think Jacoby Ford's or Kelly's usual quick slant inside, or a TE over the middle) or against a mobile QB where the Robber is also a Spy. In other terminologies, its called a "floater", or, as in Saban's playbook, a "Rat."

The advantage of this defense is that its pretty simple as a base, everybody plays man coverage, and the LB or S who isnt matched up on a RB or slot man generally plays the Robber, with the FS playing deep. Whomever gets assigned as a possible robber on any defensive play call though, must be able to read screen plays, pass, and be good against the run. 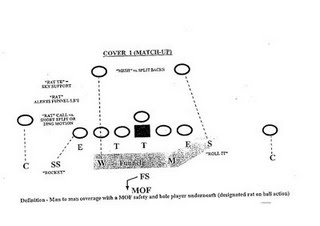 There are a lot of adjustments and calls made after recognizing the formation by MIKE and the FS, which are depicted in the figure, but that need not be described here. The front itself can easily be changed (under/over, etc) and is done after recognizing the formation, as always. The key of the linebackers (who they watch after the snap) doesn't have to change either, except that they play man in pass reads.

The responsibility of SAM and WILL, in this Cover 1 call against the Pro set, is man/man on the RB who breaks to his side. Occasionally they'll be asked to adjust to slot receivers if another DB isnt on the field, but primarily that will be handled by the two safeties. The SS is matched up on a TE, and tries to funnel him inside to the LBs, one of whom will be the Robber. The corners can jam their WRs and try to funnel them outside to the boundary. In the most basic alignment shown in the figure, MIKE or SAM ends up being the Robber.

Now for some specifics for Cover 1 Matchup:
SAM is watching the RB to his side, and if he blocks or breaks to the other side, and the TE releases, SAM must back up and becomes the Robber. MIKE would take that RB if he breaks to the strong side. If they send out a 3rd WR, he has to pick up the TE man/man. Notice in the figure that W and S are flipped because of the front call, but it could be the other way and usually it is.

WILL is playing just like SAM, whichever RB breaks to his side, he covers. If a RB comes out in the slot, WILL stays on him. He would play the Robber if the RBs break to flood the other side of the field with recievers (like if the HB runs up the opposite A-gap towards MIKE, and the FB ran to SAM).

MIKE is the one who needs to be the smartest usually. He's got to wait to see what the RBs do before he picks anyone up. If they run towards him, he tries to funnel them towards either OLB who is free playing Robber, but a majority of the time he is the Robber. For this you would need someone like Maye, who is fast, pretty good in coverage, and can tackle.

The SS is matched up on the TE, and funnels him inside, towards Robber. If a 3rd WR is sent out, he would pick that guy up himself, or, depending on the call, the FS would pick up the slotman and the SS would play the deep zone. Generally if the slot is close to the Strong Tackle, SS would matchup, and FS would play deep. If the TE or slot motions to the weak side, FS has to pick him up man/man and SS plays deep. If the TE blocks, then he is designated the Robber, because that nearly always means that RBs are coming out on a pass pattern to tie up the LBs.

FS has the easiest job from an assignment standpoint, he's there to stop any post route first, and then help deep on deeper plays to prevent the home run. A slot WR sent outside would mean he switches Cover 1 with the SS. Corners are matched up man/man on their WRs.

A small adjustment is Cover 1 Buck, where the SS is playing close to the LOS for run-support, and SAM always has the TE: 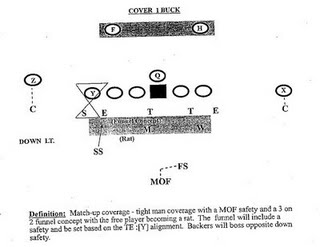 Here, either the SS or WILL picks up a RB to their side, and MIKE only if the RB comes over the middle. Whomever is free ends up being the Robber. If a slot WR comes out wide late, SS and FS flip assignments, like above.

Watch this video and you'll clearly see the LB, #30, playing robber after the snap. Everyone else is matched up man/man, and the FS is playing deep.

The object of the defense is to show a different front and make the QB make a read that is different from the actual defense being played. Cover 1 Robber generally shows a Cover 2 look, with the FS being lined up about 12-15 yards deep from the Weakside OT, and the SS about 8-10 yards off the outside shoulder of the TE or slot man. The man assigned to be the robber on each call is changed based on what the offense shows, giving you multiple options from the same basic look.

Note in these films, meant to showcase particular offensive plays, that the defense hides their look til just before the snap, but you can clearly see them playing Robber afterwards. Green Bay just beats it.


Again, here, but they had the FS playing deeper, and it appears the SS is the one playing Robber.


So thats a basic explanation of Robber, but like any coverage scheme where you can play man or zone, there are tons of adjustments you can make based on gameplan for that opponent or simply formations.