Share All sharing options for: Inside the Steele Curtain: Cover 3 Zone Blitzes

First thing to get straight in your head is that a zone blitz is not what is called anytime you see a Defensive linemen drop into coverage. In reality, a DE may have a seam/flat responsibility on pass plays even when a blitz is not called. Also, just because you see the down 4 linemen rush on a play doesnt mean that a zone blitz wasn't called.

A zone blitz just means that you called a blitz, and you're playing zone coverage behind it, as opposed to man/man. Thats all it is.

The primary zone coverage behind a blitz is Cover 3 and most DCs will play what is called a "3-3", which just means Cover 3-3 under. Only 3 guys are playing the underneath zones, as opposed to the usual 4. You rarely call a zone blitz with Cover 2 behind it, because the lack of another underneath defender creates an extra seam in the defense somewhere that is easier to exploit should your LB not get to the QB fast enough. In fact, in Saban's playbook, there are only a couple of these, and those are from Nickel coverage (usually the Nickel CB blitz).

SmartFootball has two articles up on one type of zone blitz: the Fire Zone 3. Here the term "fire" essentially means that the MLB is stunting on his blitz, but in some coaches' terminologies it can mean that the blitz comes from the weakside seam area. His analysis and the links therein are for the strongside (SMACK=Sam and Mike) fire zone 3. The play from the Saban playbook is the same, and the DE is the guy with seam/flat responsibilties. 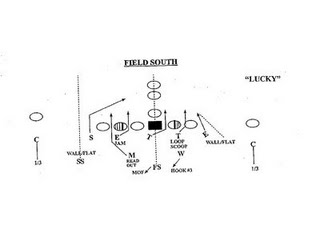 In these terms, "Field" means the wide side of the field, as opposed to boundary (see hash marks on figure). The field side is 'usually' the strong side, and most teams, when they throw, will do it to that side. In that case, the blitz is coming right at the QB's face. The defenders have different responsibilities (than what is in the figure) if this is called and a run play happens. First, seeing their relationship to the sidelines, the "UNDER" front is called by MIKE.

The terms on the figure indicate what the linemen are doing from alignment and technique. In the pro-set (2 RB-TE-2WR, called 2-1-2) example, here is what is happening:

The weakside DE is looking for run-first, and is playing a 6 technique, slanted at the outside hip of the LT. Once he reads pass, he drops to the flat. If run, he crashes inside. The idea is that he is to pick up any RB safety valve that runs out that side, or help on the X (split-end) if he stays short. Understandably, he could be in a major mismatch, but recall that the QB doesnt expect him to be there. If the TE is to his side, his key changes and he jams him at the line before releasing.

The weak/boundary DT is supposed to run a specific stunt to the B-gap on the LTs inside hip, and the other DT runs across the Center's face to hit the A gap on the boundary side.

The other DE, upon reading pass, jams up the B-gap, trying to hold the blockers up and keep the LBs free.

SAM, lined up in a 9 technique, blitzes off the edge. If they decide to roll out a slot WR, he wont blitz and is assigned to that slotman at the line. His coverage responsibility in that case is split with the SS playing zone on that side.

MIKE blitzes as well. If the ball goes away, the closest A-gap is his to cover because the DE is supposed to jam up the B-gap in either run or pass.

WILL is playing Stack in the pro-set case, playing hook zone on pass plays. In the event that a slot WR is sent out, and Sam is unable to blitz, WILL takes over his duty and blitzes off the edge. The CBs and FS are backed up into normal Cover 3.

There are various further coverage and run play adjustments (sky call to the boundary, for example) based on the formation and field/boundary shifts of them, but basically you wouldnt check out of this blitz unless they went to a 4-wide situation when you'd have a big matchup problem.

Here is a video of GT running the exact blitz above against us. Watch the backside DE backup into wall/flat, which you probably wouldnt see if you watched this play live, unless you were paying attention.

A quick alteration is to flip the zones covered by the WILL and that DE, its the same coverage otherwise. 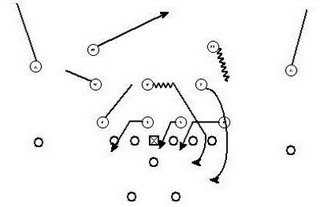 I've had trouble finding illustrative videos, but here is one with a SMACK blitz. When you watch it you'll see MIKE and SAM blitz, but watch it twice and on the 2nd attempt you notice them rotating their coverage deep into a Cover 3, with the SS playing the curl/flat and the CB on the strong side backing up deep. On the weakside, you'll see the DE backing up to play zone. The play in the video corresponds to the one above.


You could just as easily flip this to the weakside, where it would be called a WHAM blitz, where WHAM=Will and Mike. 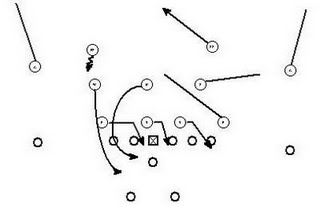 In the play above, the DE on the weakside (Ricky Sapp) executes a long cut, which just means he's supposed to slide to the A-gap. Thats not easy for him to do because the OT and OG will try to pick him up, but all this movement is supposed to do is to get them watching him, and open lanes up for the LBs. The NG cuts across the Center and into the other A-gap. The other DT executes a "slam", meaning he runs right at the hip of the strongside TE. If the QB manages to get away from the blitzing LBs, his job is just contain him and make the tackle.

The strongside DE (Bowers) would watch his key (RB to the ball) and wait for run first before dropping back into his zone. The QB does not expect him to be in that zone, once he reads that the Mike is blitzing.

Field Frisco is another alteration on the same idea, where the SS blitzes instead of SAM. 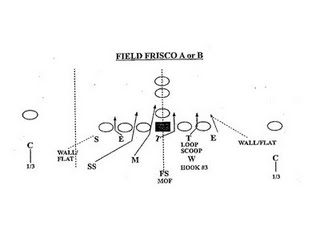 How is this effective? The defense aligns such that the QB will read a Cover 1 or Cover 2 initially before the snap. If he picks out that one LB is blitzing, he'll just think "Man coverage on somebody in that spot" which might make him think the whole coverage is Cover 1 (man-free). After the snap, the defense slides back into Cover 3.

Well the OT's job is the most intuitive one: block the DE across from him. Its a wasted assignment on the DE because he's trying to run across the LOS, not at the OT, and by bringing the LB or SS, the running back is forced to stay in and not release into a pass route.

From a Nickel personnel grouping, here is a pretty good explanation of a MIKE+SS zone blitz.


So this is essentially the type of zone blitz you will see Clemson run this year, its the most common form, used from the NFL to high school because its the safest. You can also have called key blitzes that will play the normal man/man or Cover 1 behind them that you usually think of when you hear the term blitz, I'll try to get to those soon.