Share All sharing options for: Well thank you Ron 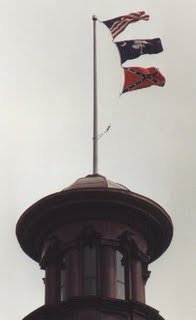 Thanks Ron Morris for bestowing the readers of The State with more of your wisdom.

You might have forgotten that Columbia can never be the site for a pre-determined NCAA tournament. Never, at least, until the Confederate flag is removed from the State House grounds.

So, it will not happen in my lifetime. No doubt, it will take at least another 50 years or so for the state of South Carolina to move into the 21st century. But I will leave that argument to our fine elected leaders on Gervais Street.

The NAACP bitched about us flying the confederate flag over the Statehouse dome, and said they'd boycott the state until it was removed.

David Beasley gets elected Governor and pledges to stand up to them, then flipflops and it is removed from the dome, according to their wishes. The NAACP decides then to expand their demands to cover the entire statehouse grounds because its too prominent for their tastes.

We kick Beasley out of office for the flop, as he said this:..."God told me to take it off the dome..." Well Dave, God told the rest of your voters to vote your ass out of office for flip-flopping, even though you didn't make it long enough to actually sign the bill that removed it. That buck got passed to Hodges, who screwed up in many ways.

Now I can certainly see the reasoning to remove it, and I'm no racist, but I am a southerner and I don't care about what vocal minorities think about what I believe or do. If the voters want it there, then put it there. The only reason its not back up there is because no legislator wants to write the bill and be labeled as prejudiced by the rest of the media.

Nevermind that people who would call you prejudiced and racist are likely from liberal areas which would also deduct 50 IQ points because you have an accent.

Since the NAACP sees we're not going to budge on it, they lobby athletic teams, concert organizers, and any large event planners to boycott the state. Nevermind that SC has a large black population that is employed by large public events that are boycotted. Who works the ticket windows, vendors, and turnstyles? Who is there waiting to take your money when you park your car in a lot? Wouldn't their energy be better directed at paying these people more money? Do they even care about their constituency?

If the NAACP needs something to do, perhaps they would work to raise funding for education in poorer areas, or scold parents of children who flunk out in elementary schools when I made A's and B's with the same teachers, instead of telling people that those who fly a confederate flag are racist bigots.

Does anyone realize how many southern states have confederate memorials on statehouse grounds? Do you hear as much about Mississippi, which has a higher black population than SC does, and has a confederate component in their state flag? Their legislature didn't bow down because it hurt somebody's feelings.

Does Ron Morris cover any of this in his article? No, because he's a bomb-thrower.