Clemson drops to 18/19th in the polls

Share All sharing options for: Clemson drops to 18/19th in the polls

Thats better than I expected, but I still believe this team is capable of beating anyone outside of the Top 5 right now, if they get their shit together. Honestly, FSU should be ranked ahead of us.

Dr. Saturday has an interesting article on the recruiting practices at Tennessee. Tiger fans should know that both the recruits mentioned in that article are also being recruited by Clemson and were here for our Junior Day.

Another talks about Virginia's fall, despite having recruited well during Groh's first couple years in the conference.

Gaffney QB Joe Craig is seriously considering a Clemson commitment. We're after him as a WR or DB, but at Gaffney he won't ever play WR, given that our offense really blows without him running it (last season we rotated 3 guys at QB and Craig was the only one that could do anything). I think he's going to play Safety if he plays on defense at all at Gaffney for 2009, and Gaffney rarely plays people both ways. Clemson is preparing to take up to 3 WRs in next years class, and they already have Martavius Bryant committed.

Spurlid talks about the upcoming Spring Practice at Sakerlina here. I want you to notice this quote:

"The attendance, the discipline here just wasn't as good as it is at most schools," Spurrier said. "But you can't just run 'em all off. You need to keep football players. You can take playing time away from them and we've done that, but I really think this group gets it."

What? you've signed over 100 players in 4 years Steve. Once they go to 5 Points, and get arrested, you keep the ones you think you need and cut the rest to make room for the over-signage you do every year. 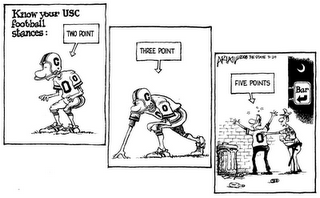