Share All sharing options for: Brooks hiring made official 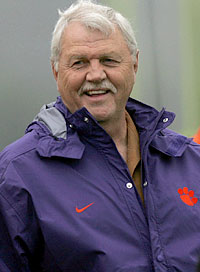 Dan Brooks' hiring was made official, (his bio) and is happy to be coaching on the field again, and an interview reveals that John Chavis tried to bring him here in December, but that Dabo balked at the idea at the time because he wanted Rumph and Blackwell to stay on the lines. If Chavis had been allowed to bring Brooks, Dan says that Chavis would probably be here now instead of Steele. Les Miles had already picked Brick Haley to coach DL, so there was no job at LSU for him either when Chavis took the job.

Steele details some of the requirements of the "bandit" DE position (essentially the weakside DE), and that he wants it more of a LB/DE Hybrid, which only means that Sapp and Alexander are going to be asked to drop into coverage in the flats or hook zones more often, instead of the pure pass-rush position it was under VK. Sapp has always had a OLB body so the only point of concern is that he is not able to practice this spring. Its the play of this position that made folks think of Alabama as being a 3-4 scheme this past season. What I've tried to point out in discussing the fronts is that you can't pigeonhole a scheme, if I just stand someone up sometimes, then the defense will look different enough to confuse the QB.

Maye's fight in practice was with McClain over a cheap shot he thought he got after a play. McClain is being raved about up front, so hopefully he'll produce this year.

Marquan Jones is slated, at the moment, behind Jacoby at Z position WR (FL, which motions alot in this offense) but is getting alot of PT at A (slot). Dye and Jaron Brown are fighting over X (SE), Kelly's former position. Brandon Ford appears like he will be 2nd/3rd string at a slot or X position.

Spencer Adams has been cleared for shuttle drills.

An article on Rendrick Taylor's struggles with injuries reveals he contemplated transfer, and his role in the offense assuming he doesnt break something this year:

Taylor is splitting work at a couple of positions this spring, both mainly out of the backfield at the U- and S-back positions.

At U-back, Taylor is working much like an H-back would as a fullback/tight end hybrid, while his S-back position is a power back role, both of which he has impressed at so far during the spring according to Clemson head coach Dabo Swinney.

"We’re continuing to cross train him in both regards so we can utilize his talents and create a good situation for us," Swinney said. "Rendrick can tote the rock. He can run it, and he’ll be a threat."

Taylor was just one of a number of Tiger backs who shined in their first stadium scrimmage of the fall last Saturday in Memorial Stadium, as the senior piled up 46 yards on only eight carries, which included a 3-yard touchdown scamper.

I hope that 265lbs he carries is muscle, or he should be running too.

Jon Richt is looking at Valdosta State for his transfer.

Baseball
Baseball faces a midweek set against the #6 Jawja Puppies, away tonight and home tomorrow at 7pm, barring rain. TI/SIDs preview. We are 7-5 in the Atlantic, and 2nd place behind 6-4 FSU.

Basketball
Seth Curry went to Duke, and you have to admit, he's a good fit there.

A season-ending press conference was held with Purnell and some of the players, where he said that he would not accept failure and reiterated that defense was the main problem down the stretch.

"It wasn’t any one phase; it was our transition defense, our half-court defense, 3-point field percentage defense and our pressure. It wasn’t consistent enough. Obviously, when we were really, really good, those were areas we excelled at and that’s something we’ll focus on in the offseason."

He then stated, flat-out, that Booker's job is the only one thats not open for next year.