Share All sharing options for: Clemson stumbles against VT

After playing a great game against Maryland and well against GT, we came out tonight and couldn't do a damn thing on defense when it counted, and lost to VT 80-77. Its not that Clemson played terribly tonight on both ends of the court, because we did do decently shooting (42.2% to their 43.3%), it was the lapses of intensity and concentration that I think cost us this game.

At times during tonights game, I'd compare our defensive performance to overpersuit in football, because we just looked out of sync altogether. We got beat in transition, again. We got outhustled on the boards at times (though we won the rebound battle overall 39-34 and the Off. Rebs 14-11), and the sloppy passing and generally being out of position and not focusing on defense cost us this game.

OP stuck with his full court well after it appeared to not be working, and switched to half court at around the 10:00 mark again. Its like his motus operandi now. I will be the first to acknowledge that it has worked magically in most of our wins this year, but the reluctance to get out of the full court press when we're getting whipped in transition has also cost us in our losses. VT beat us with the 3 out of the half-court (11-19, as opposed to our 7-20) and stole the ball away from us when our guys weren't focusing in transition and on offense.

At least the baseball team went to 4-0 with their win over Wofford.

So to cheer you up, I'll give you a taste of what my Lundi Gras (monday) was like. 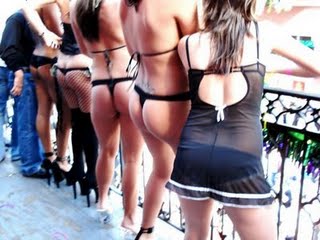