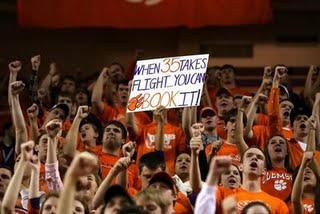 Game notes to mention from the SID:

Gary Williams-"Clemson did a good job tonight. They made us scramble in the first half and we missed shots down the stretch and they made them. Once they got hot it was hard to stop them and we had trouble scoring." 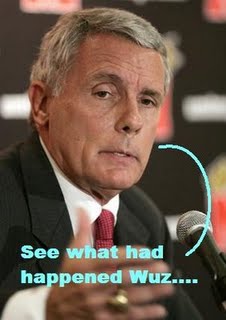 Some Maryland fans apparently have a different definition of ass-beating....talk about "glass half full" points of view. Only a few missed opportunities dude. The Baltimore Sun recap is here.

One Maryland blogger gives his opinion on the game here.

Larry Williams has a good article up on Trevor Booker. It was Booker's dunk that changed the game, as we went on a 33-8 run just after (#3 on ESPN's Top Plays). However, Booker only took 5 shots, and that is not enough to win the ACC Tournament or win in the NCAAs. He must take over 10, and I recognize that his defensive effort made up for some of his lack of shooting. Even though we spread the ball around well in the 2nd half run, our playmakers have to step up and do better in their consistency.

In the first half we attacked with the guards directly to the basket, I was pleasantly suprised that we did so well at that when we haven't in most of our confernece games. Our offense works off the Press and how it moves our players around to get scoring opportunities (particularly after the other team is tired), not consistent high scorers (like Will Solomon or Greg Buckner). You might say that you like how we spread the minutes and scoring around because you don't have any prima donnas on this team, but an attacking guard or forward who consistently pulls down 15-20ppg carries you on nights like we had against FSU or UVA until the other guys can get it together and start a run. The refs started out calling ticky-tack shit on us, and I thought we'd get in huge foul trouble, but that dropped in the 2nd half, that can be attributed to our run (you dont foul when youre not having problems scoring). You probably noticed how sloppy we got late in the 2nd half on defense too because of the large lead. Its a great win, especially since Maryland had really come on strong in the conference lately, and we finally shut down a good Guard (Vasquez).

We're now 2nd in the conference, and play GT next. We can't afford a letdown there.

ESPN Columnist Dana O'Neill has a touching story about Tanner Smith and his family's battle with cancer. Donations can be made to http://www.tannerstotes.com/