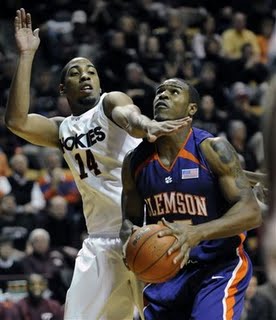 We beat VT 86-82 last night, overcoming a very shitty first half to have a for-the-most-part stellar 2nd half. It came down to the wire, as usual, and we didnt stop Delaney til we switched defenses. Clemson played horrid on defense in the 1st and transition still eats us alive. In much the same way Wake attacked our Full-Court Press, VT passed and always found open men in the half. It was a lack of hustle and intensity defensively, not the scheme. While I was yet again clamoring for OP to ditch the full-court for the half-court, he stuck with it til around the 16min mark of the 2nd, and depending on your POV it might've paid off to use it as long as we did. VT did look tired at the end.

But WF nor UNC looked so tired, and OP stuck with the press against them longer than he should've as well. I still believe J. Grant should start instead of Sykes, or at least get more minutes. Sykes tends to have flashes, then completely FUBAR the next minute.

It was great to hear Bobby Knight doing commentary, I enjoyed hearing how the man thinks during a game.

A replay of the game is available for viewing online.

On another note, it speaks to the level of the program that VT would choose us as a "blackout" night. I wouldn't have expected that. Funny that it turned out just like the blackouts in Columbia, now if we could extend it to VT football....

Puke comes in Wednesday, and although they made some stupid defensive plays at the end against WF, I do not expect that curse to extend to us. I predict we get raped in transition yet again, but I think we win the game close.

What the fuck is going on with girl's basketball? and Volleyball players are almost as dumb?

Recruiting
-3 star OLB Eric Fields is apparently not bright enough to take his ACT/SAT, so he's off the board. He was rated #25 at his position. Its unfortunate, but if you haven't taken your SAT by January of your senior year, I don't have much sympathy for you. This has been feared for awhile, and there is probably more to it, but if he doesnt at least try to take his test, his LOI is void anyway. He never made his official visit because he never took the test and now we have to pull off totally. Clemson feasibly could sign and place in a prep school, but that isnt going to happen either (LOI is still void). He'll end up at a JUCO.

-K Chandler Catanzaro pledged to Clemson, and will be given preferred walk-on status, turning down a full free ride to Furman. He has plenty of leg, hitting from 51 twice as a senior.

-Sources say we will offer Darrell Smith this weekend on his visit.

Strelow informs us that Dabo plans to give the extra scholarships we have from this class to some older walk-ons, and talks about Fields.

Korncoot talks about our top 3 targets here. Napier is set to visit Brown tomorrow, but he does not plan to announce until after next Wednesday.