Share All sharing options for: Tebow chats with Erin Andrews, then announceshis intentions... 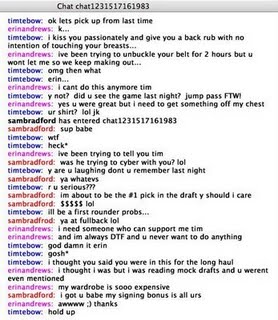 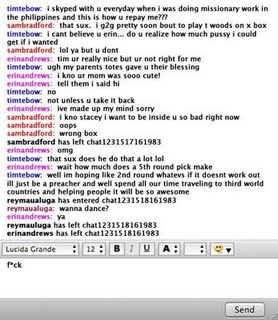 MIAMI (SP) -- Shortly after leading the Florida Gators to a national
championship with a 24-14 win over Oklahoma, junior quarterback Tim
Tebow announced that he would skip his senior season and ascend
directly into heaven.

Tebow entered the press room to wild applause. A reporter for a 24-
hour cable sports network burst into tears when the 2007 Heisman
winner entered the room. Another threw a pair of boxer shorts on the
podium. Tebow smiled at the gesture and several sports reporters
fainted.

"Sorry I'm late," Tebow began. "There was a six-year-old boy with
cancer in row 54 and I had to make my way through the crowd to heal
him."

"I want to start by saying that playing quarterback for the University
of Florida, winning two national championships, has been a great
honor. There has been some speculation about my future and I want to
clear that up right now," he continued.

"Don't go, Tim!" a reporter shouted from the back of the room.

"After much consideration, I have decided to skip my senior season at
the University of Florida and ascend directly into Heaven," Tebow
announced. Upon making the announcement, Tebow was bathed in a
blinding white light and vanished.

In response to the news, ESPN announced they will have a month-long
tribute to Tebow. ESPN2 will now be known as ESPN-TEBOW and will
feature Tebow highlights (including home videos of Tebow's childhood),
re-airings of past interviews, Tebow-centric analysis by ESPN air
personalities, a Tebow quiz show and a reality show to find the "most
Tebow-like" person in America.