Share All sharing options for: Dumb shit on TNet.

I generally don't call individual TNetters out and point out their screennames unless they go and say something really fucking stupid.

Well this particular idiot did. 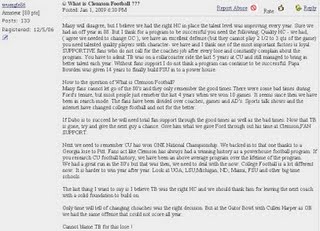 Right HC in place? Explain it to me how the RIGHT HC FAILED to win the ACC, despite having better talent the last few, and beating FSU soundly? 2008 was an "off" year, what about a GINORMOUS clusterfuck starting from day one, kinda like the start of 2003, the end of 2006, 2007. If the RIGHT HC was in place, he'd have fired Spence or taken away his playcalling duties long ago. If the fans never bitched, we'd still be running a Brad Scott offense where I can could the plays from the sidelines myself, with no background in coaching. I'm supposed to put up with losses to fucking Wake Forest and Duke after stomping FSU or Miami the weekend beforehand?

Bobby Bowden had a different situation in the beginning, but he also actually WON in the beginning, which helped him get a solid footing for the up & down years he had in the '80s. If Tom had won the ACC a couple times, he couldve finished with the same record that he did when he was fired, and he'd be here today.

How is it an undefeated team BACKED into a National Championship? We beat the #3 defending NC Georgia team early, and Pitt LOST the last week of the season to Penn State, knocking them out of the #1 spot. The Sugar Bowl loss by Pitt had zilch to do with it.

The greatest coach in Clemson history isnt the standard? The guy who won all those ACC titles and a national championship isnt the standard? If Danny Ford was not fired by that sumbitch Max Lennon, you're the type of dumbass that would still be clamoring for his job because he doesnt throw the ball.

Maybe you should stop listening to your Clucker friend's bullshit about NCAA investigations. Do the research asshole.