2nd team Free Safety Sadat Chambers was arrested at 2am by a Chesterfield deputy, after failing to dim his lights for the officer, for having a suspended liscence and driving. Strelow at The State initially published a hatchet job article, but then retracted a little.

ESPNs Pat Forde takes jabs at the Dabo Swinney hire and others:

Here in this holiday season, it's time to stop and give thanks for the bountiful gifts sports supplies us.

Specifically, lift a mug of eggnog to college football, which is putting the finishing touches on a run of coaching hires that have been a laugh riot. These college administrators, they kill me. Now that Tina Fey has shelved her Sarah Palin impersonation for the time being, where else can you get comedic quality like this?

Mississippi State's decision to hire Florida offensive coordinator Dan Mullen was a coup. The vacant jobs that have been filled in automatic BCS qualifier leagues to date are Tennessee, Auburn, Mississippi State, Clemson, Washington, Kansas State and Syracuse. The seven (white) men hired for those prestigious jobs had a combined head-coaching record in 2008 of 7-15.

Seriously. Is that not the funniest thing you've heard in weeks?
If you're scoring (or laughing or crying) at home, that's 2-10 for Gene Chizik at Iowa State, 4-2 for interim Clemson coach Dabo Swinney and 1-3 with the Oakland Raiders for Lane Kiffin. That's whoopie-cushion material right there. None of the others sat in the big chair this fall.

Among those not hired: Mike Leach (11-1 at Texas Tech and in a mood to move, had there been interest) and Turner Gill (8-5 at Buffalo, not long ago the worst program in America). Short, sweet question for the slapstick administrators in question: What the #### were you thinking?

Wait. Before you answer, here's what I'm thinking of each of those hires:

Clemson. The hire: Swinney, who was recruiting coordinator and wide receivers coach until Tommy Bowden was whacked in midseason. The grade: D-plus.

Swinney was part and parcel of a failed season, but somehow got a promotion out of the deal. Who knew that beating Duke and Virginia could lead to such ample rewards? Clemson fans loved the fact that the Tigers closed the regular season by beating rival South Carolina. But hey, Bowden beat the Gamecocks seven times in nine tries and look where that got him. Swinney has the same thing going for him that Sarkisian has at Washington: the in-conference competition in the ACC isn't that stiff.


Now, I'm not saying Forde doesnt come across as a total dimwit with that article, but we should take a second to look at the national perception of the hiring.

Dabo has no head coaching experience at any level, no national recognition, absolutely no fame as a player, and no coordinator experience. No one else in America was going to hire Dabo as anything other than a position coach or recruiter, thats all Saban wanted him to do. Our WRs are not even fantastic. Swinney was on no OC lists anywhere. He was not on anyone's HC 'maybe' list. Dabo could rightly be viewed as a minor cog in the failed regime of Bowden. On almost anything other than 'hunch' level or a charismatic personality level, the Dabo hire makes no sense. He beat BC, which was one thing Bowden couldnt do. The team wasnt dominating against anyone until SC, and we always beat their ass. 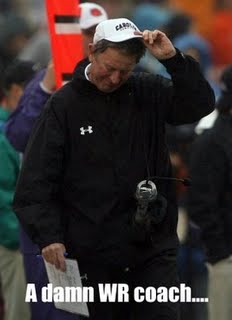 RubtheRock has an interesting interview with Reggie Merriweather everyone should check out.

Clemson has dropped McCalleb from its list (grades) and is raising the activity around Tim Simon and Daquan Hargrett .