Rimington talks about the Orange Bowl

Share All sharing options for: Rimington talks about the Orange Bowl 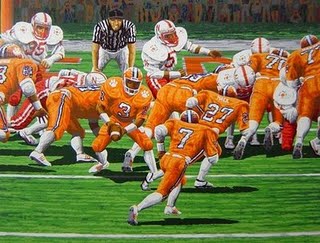 Outland Trophy winner Dave Rimington was the Center that Fridge and William Devane were matched against in the '82 Orange Bowl, and he talks about the matchup here.

I watched the tape of the game again, and it looks like the announcers felt that Rimington was All-everything and was going to manhandle our front....but he didnt. While I'd say he's right in his assertion that Fridge and Devane didnt really dominate, they did bust up that Nebraska line several times. It was a solid battle up front between two physical teams, and we got the best of them more often than they did us. In those days Clemson played alot of 5 man fronts (3-4 sets with the OLBs playing at the line) and double-teaming was not an option most of the time.

Are you gonna miss Aaron Kelly? All this hoopla about receptions and Terry Smith's records....Do you know why Terry Smith has those records? Its because he was the only WR on those teams who had ability, and they threw to him all the time. I'll miss Kelly's 3-5 drops per game, right.

Rod Gardner is who I miss. You throw it in his general direction, he catches the football.

A couple of articles give mention to Blackwell and West running the defense, and how we're supposed to stop the potent Nebraska offense, which is a mix of West Coast principles with old-fashioned Nebraska power running, and a dash of motion.

With LSU likely taking D. Walker from UCLA to run the defense, it appears that Chavis is Clemson's, and unless Blackwell shows out in his play-calling thursday, I can't see why it wouldnt happen. Its not surprising that it has not been announced though, with recruiting going on. I was hoping Dabo would at least try to interview Dick Bumpas (TCU DC) now that his bowl game is over.

Edit: Chavis has accepted the job at LSU, for a reported 500K (he got 340+ last year at UT). TI thinks that Steele is a candidate now...which makes no sense to me.