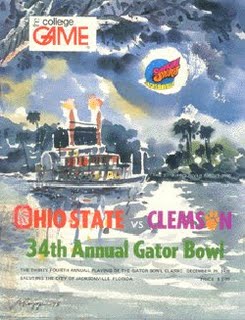 Clemson's Steve Fuller-led team finished the 1978 season 10-1, with their first ACC Title since 1967.Ranked 6th, Clemson was invited back to Jacksonville (we got whipped 34-3 the year before by Pittsburgh), this time to face the 7-3-1 Ohio State Buckeyes, whose losses came to (11-1) Penn State, (9-2-1) Purdue, and (10-2) Michigan. Ohio State had defeated only one team who finished with a winning record that season (Wisconsin, 5-4-2). 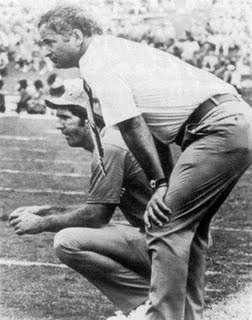 But despite the good feeling about the season and the direction the program was going under Pell, things were not alright in Clemson. Pell was being courted by the Florida Gators, and was ready to leave, saying "You just cannot win a national championship at Clemson." IPTAY tried to get him to stay by purchasing a new Jaguar for Pell, but once he said he was going they turned to a young assistant named Danny Ford. Pell offered to coach the team through the bowl game against Ohio State, after spending a week in Gainesville setting up shop, but the Clemson administration and fans refused, as they all wanted Pell's full attention to go to the Buckeyes.

Woody Hayes' most famous comments came when you asked him about the passing game, citing that only 3 things can happen when you pass, two of which are bad. His freshman QB Art Schlicter was good though, and finished the game 16-for-20 for 205 yards, with another 70 rushing.

While Clemson dominated most of the game in the trenches, Schlicter brought the Buckeyes back into it in the 4th Quarter and scored his second TD of the night with a little over 8 minutes left in the football game. Jim Stuckey tackled Schlichter on a sweep to prevent the two-point play, and Clemson still led at 17-15.

Clemson handed the ball back after only a few minutes on the next possession, and Schlicter brought them downfield again, pounding us up front. Late in the 4th, faced with 3rd & 5 at the Clemson 24, he dropped back to pass, missing a wide open reciever to his left and throwing to a RB over the middle. The pass was underthrown, and was intercepted by backup nose guard Charlie Bauman.

This was to be Woody Hayes', the fabled Ohio State head coach, last game thanks to this bonehead moment, when he hit Bauman, after he was dragged down at the Ohio State sideline.

Players on the Ohio State bench intervened, pulling Hayes off Bauman, while Tigers ran across the field. Though the hit was on live TV, cameras almost immediately panned off, and Keith Jackson says he didnt see the incident to this day. ABC never replayed the hit, later saying that its videotape machine as busy rewinding to show the interception and therefore didn’t catch it.

But it was replayed nationwide the next day, and Hayes was immediately fired. Hayes died of a heart attack in 1987, having never apologized for the incident publicly, or to Bauman.

The next season, Schlicter led the team to the Rose Bowl undefeated, where they lost to USC for the national championship.

6 players on the 1978 Tiger team became 1st Round draft picks by the NFL.

A few years ago the LA Times went back and looked at the incident with Bauman. As well as the Washington Times.

Hayes won 238 college games at Denison, Miami of Ohio and Ohio State, and his share of detractors.

He had no hobbies beyond football. He saw the game as the embodiment of American values. "Without winners there would be no civilization," he said.

Before Charlie Bauman, Hayes would dress down sportswriters, elbow hecklers and hurl haymakers at a Times photographer and an ABC cameraman.

"You ask, why are we talking about him now, why is he still interesting?" Natali said. "One reason was because he was so deeply and publicly flawed. I think it was the mistakes he made that made him that much more compelling and interesting."

I probably would've liked the guy.