John Chavis, The Chief, Def. Coord for Tennessee, is rumored to be on the list for jobs at LSU and Clemson. He interviewed with Swinney per TI. He, along with Alabama DC Kevin Steele, is from Dillon, SC.

Steele is intriguing as he flirted with Arkansas for the DC position there last year, and almost went to U. South Alabama as HC last year. Why he would've left Saban for Petrino is beyond my comprehension. I don't think he would come to Clemson unless he just wanted to come home to SC. Why would you give up a shot at a national title for the same job somewhere else? He already makes $360K at Alabama, and they would match any offer, bet on it. (Chavis makes about 340K)

In the meantime, Blackwell and West will coach the defense for the Gator Bowl.

While Swinney said he doesn’t expect to have a coordinator hired before the bowl game, he modified the statement by saying if he did, the Tigers would adjust staff responsibilities as need be.

The scheme run by Chavis is essentially the same as Koenning, a 4-3, and he plays alot of soft Zone coverages, but Chavis will blitz from everywhere, which is what (we all) Dabo wants. Chavis is credited with initiating the zone blitz to college football, and specializes at LB/DL, so Blackwell or West would probably go. He's regarded as a mediocre recruiter, but would likely bring DL coach Dan Brooks with him, who has stolen alot of recruits out of the Carolinas (Jeff Coleman and Shaun Ellis and Leonard Little come to my mind). That means Chris Rumph would leave, likely West will be gone at least and Blackwell could stay on. Tennessee fans are split 50/50 on the guy, some hate, some love.....most dont like that he's gone to soft zone the last 4-5 years. See here the defensive playbook.

WoodyMac and Charlie Harbison are coming back
Think about this: Flagler, Flowers, Allen at Clemson. McCorvey recruited those guys.

When Tennessee was bringing in every RB recruit in the southeast in the early 00's, it was Woody that stole them from Georgia, Clemson, Alabama, Auburn, etc. Jamal Lewis, Travis Henry, Travis Stephens...etc.

The man who brought them in is coming back to Clemson. I think he's one of the top recruiters in the southeast, and one of the best position coaches in the country. He's rumored to be put into an administrative position, at least for now, after jilting Spurrier (again) for the WR coach job. With Jeff Scott keeping the WR coach position, Powell's head might be on the block, which is a shame given how he's helped our Special Teams the last two years.

Lately he's been the OC at Miss. State, which was a horrible offense, but that works fine for us because this guy is damn good at recruiting and coaching RBs. Jerius Norwood still surpassed 1000yds at Mississippi State for this guy.

If Jeff Scott is kept as a GA only, with WoodyMac and Burton Burns (just a rumor) on staff Clemson will clean house in recruiting offensive skill players.

Charlie Harbison is coming back to Clemson too, a former DB coach under Tommy West (and Nick Saban), who is a great recruiter in his own right. Sure, he was here for the Ford brothers (Toast and Burnt), but also coached Dexter McCleon. He brought in Alex Ardley and Robert Carswell. At Mississippi State he coached D. Pegues, likely a 1st or 2nd round draft pick at FS. At Bama, Fernando Bryant in 1999 and Tony Dixon in 2001 were taken in the first and second rounds of the draft. He's recognized as a Top 25 recruiter in the country by Rivals. This guy is a step up from Koenning in recruiting (by FAR) and a position coach. Harbison will make about $250K and his deal expires in Dec. 2010.

Our favorite Cockfan has posted again

Damn you, Steve Spurrier. Damn you for making me right about your offense’s sad futility, damn you for sabotaging the entire football team, university and fans by sticking with the pitiful Chris Smelley while he literally threw the game away for the second contest in a row, and damn you for lying to fans about why you did it.

....And, USC had two stinking weeks to get everyone ready for this game, time in which, if I understand correctly, USC did not practice as much as it could have in preparation for Clemson. Great move there, Steve. That really paid off handsomely. 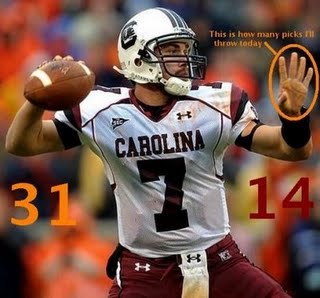