You might think that with an 11 point win, and our 5th straight win over Sakerlina, that we really dominated this game, but that was not the case.

We came out in the first half sloppy and unmotivated, and it showed. Sakerlina jumped out to an early lead, while Purnell tried to right the ship, as evidenced by the timeout he called after the first minute of the game. All this despite the obvious overpursuit of the SC press. With Stitt in foul trouble, Andre Young stepped up big throughout the game and it was our depth that really beat the Cluckers, not our defense.

Throughout the first half, Devan Downey basically ran the exact same play over and over: he would start at the point and take it to the left of the lane and lay it right in there, and neither Sykes nor Booker would challenge him. Why? He must've ran that very play and succeeded 10 times tonight. In the second half Purnell did adjust and we blocked it much better. Most of Downeys turnovers were because he took it right down the lane. 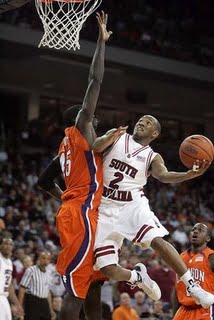 When we came roaring back towards the middle of the first half, you could clearly see that SC's defenders were getting really tired because of the amount of minutes they were forced to play. By the end of the half we built up a solid 56-44 lead that shouldn't have dwindled in the 2nd, but gotten monstrous.

But it did dwindle, and we came out completely flat offensively in the 2nd. Thankfully the defense did improve in intensity and we remained in the lead despite a strong Carolina run to start the half. They really surprised me, considering the way they looked at the end of the 1st half. A press team needs to have SOME kinda bench, but SC plays with basically only 8 men. This SC team will win some SEC games, unless people play Box & 1 on Downey, and match up a great defender to him, in which case they are screwed.

Its a win, and I'll take it, but Clemson should've won this game by 30 points, on paper. SC outhustled us all night but the stats wont show it. If they had depth, they'd have won this game. We had 20 points off the bench, SC had 5. Everything else Clemson did ok: we shot well at the free throw line (thank you God!) and rebounded well.....except for some in-bounds passing.

Why does Oglesby not get set screens? This guy is a fantastic pure shooter. He could easily have been in the 30+ range tonight.

Why does Clemson not push inside more? Booker and Sykes should both be getting more points....we dont press in the paint. They rebound well and block shots, but offensively if we'd push inside, the defense would have to collapse and then Oglesby would be open even more outside.