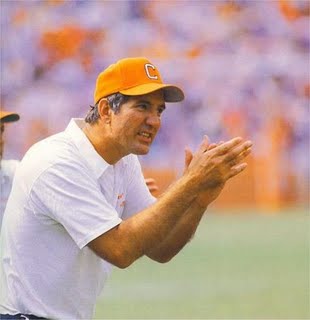 Nothing Left To Win.

In November 1989, we didn’t have much to play for against USC. We had locked up a bowl bid, had lost the ACC championship, and had no national title hopes.

In the words of Coach Ford as he addressed the team on the Sunday prior to the USC, "We got Nothing left to win."

This struck many of us as somewhat odd. In fact our faces must’ve been quite slack-jawed, because the next thing out of Coach’s mouth was… "What? You think we got something left to win?"

And on that the meeting was adjourned.

The week was a bustling environment of press, campus activity, and a bittersweet thought this was our last regular season game. But many of us seniors couldn’t shake the thought of Coach Ford’s words…. "Nothing Left To Win." As I hurried to the senior meeting with Coach Ford on Thursday afternoon, I anticipated what he would say to give me comfort, to ease the troublesome statement he had stuck in my mind.

We talked briefly about the itinerary for our trip, and the fact that we might not have a curfew after the game and that we could ride home with friends or family instead of a team trip. Nothing unusual… and then Ricardo Hooper brought it up…

"Coach, can we wear Orange on the road?"

Coach Ford laughed. "Uh, ha ha, uhhh Why in the world… you don’t need no orange pants. Naw I don’t think so." Well it was worth a shot, I thought. Coach Ford added. "Anythin’ else?" The room stayed silent. "Alright then… see y’all at practice."

Nothing said to ease my fears, nothing.

The Thursday night practice was COLD, and it went by way to quick. Before I knew it we were on our way to Columbia. We checked into the hotel, and had a late dinner, as it would be a night game on Saturday. The next day the team chose "Harlem Nights" as our team movie. I hated it. I remember thinking this just isn’t ANY fun. How could Coach Ford, just give up on us like this… how could he say we didn’t have anything to play for? How COULD HE??!!!

The rest of that day, I felt as though I was unprepared. I felt as if the last 3 years had been a blur, and I had learned nothing. Indeed, it was an unsettling trip to Williams Brice. As I got off the bus, I commented to Chip Davis about how I’d been feeling. "Me too" was his reply.

Warms ups were business as usual, and I remember being able to find my girlfriend and her friends easily in the Clemson crowd that had gathered at the corner of the stadium…

But I still couldn’t shake the feeling… "Nothing to win…"

The locker room was quiet.

"I told y’all, y’all got nothing to win." Coach Ford started. And then after a brief pause, he continued… his voice getting louder on every syllable, "And y’all don’t. But you got EVERYTHING to prove. Y’all can prove y’all are the WINNINGEST class in the ACC, y’all can prove we own them, and y’all can prove to all them writers and people who wanna WRITE YOU OFF!"

We sat in amazement… his fury was evident, and then it hit us… He WAS MAD. He was pissed off beyond belief… angry at those who snubbed their noses at a team that had beaten FSU in Tallahassee, angry at those who thought 8 wins going into the regular season finale against USC wasn’t good enough, angry at those who faulted his guys for losing a couple of games. And now his anger flowed white-hot, enveloping us all… setting off a fire inside each one of us… a fire he stoked by continuing, "I’m proud of y’all!"

And then his voice got soft… and he said, "Y’all ain’t got nothing to win… but everything to prove."

And in a whisper he finished…. "Prove you deserve to wear these."

And tossed a pair of Orange Pants onto the bench.