Blue Devils Roll to C-Town, TDP is on the Road

Share All sharing options for: Blue Devils Roll to C-Town, TDP is on the Road

This weekend, the mighty Duke Blue Devils roll into Tigertown looking for their first victory at Memorial Stadium since 1980. Not to be captain obvious, but Dave Cutcliffe is a pretty good football coach, as proven at Ole Miss and by keeping fat Phil's ass employed for the last few years and Phil's 6 smacker buyout.

The guy is also a bammer alum and was there to watch the Bear in action (no playing history), so you know he learned from the best and won't put up with a bunch of crap from anyone.

So far, he has lead the fighting Krzyzewski's to four victories on the season, which may get you a contract for life in Durham. In the last three games, Duke has beaten up on Vandy, taken Wake to OT, and lost by 10 to NC St. Long story short, you will see a much improved Duke team at CU this weekend. You will probably see a half way decent football game, but the Tigers must win this game and will.

Now, on to bigger issues. I have come over to weigh in (like everyone else in the state of South Carolina) on the present search for a permanent football coach at Clemson University. I will only give opinions and hit on the high spots and some fan favorites, as you can flip back through the blog to get all background information on the candidates through Dr. B's insight and research.

Bobby Johnson: I know the he is a Clemson grad, doesn't cuss, and has won a few games at Vandy. But from the outside looking in, I think B. Johnson has a lot of Tom Bowden in him. Good Christian guy, check. Wins a few games he shouldn't, check. Loses games he shouldn't, check. Becomes a top-25 team, then goes into the tank, check. Graduates payers, check. Has lost to Duke in the last 5 years, check. Routinely beats up on the inferior gamechickens, check.

Someone needs to tell the Tigernet faithful that back to back wins over the gamechickens is the rule for most D-1 schools, not the exception. Someone also needs to tell Bobby Johnson that losing to both Miss St. and Duke in a 14 day stretch negates your 5-0 start and your win over an over rated Auburn team.

Overall, my gut feeling on BJ is that he is a good guy, who does a lot of great things, but he is not a coach who can take this program to the next level. I see him as a 7-8 win a year coach, with both taking and dishing out an annual upset.

Lane Kiffin: As everyone knows, did a fantastic job for Pete Carroll at USC in areas of player relations, recruiting, with X's and O's, and with play calling. He joined the USC staff with Carroll, thus he did help create the juggernaut in SC.

The success at USC catapulted him (age 31) into the black hole to deal with the Raider nation, Darth Raider, and the Godfather himself, Al Davis. This scene quickly turned into a Days of Our Lives plot with Al running all facets of this team and Lane bitching to the media about the Godfather and his decision for Kiffin's coaching staff. Since his firing, the Raiders have officially spun out of control, with Al taking the spot as biggest jackass owner in all of sports.

Overall, you have to dismiss Kiffin's time in Oakland as his hands were tied. He has proven himself as a valuable coach at the college level with his time at USC. However, there are two concepts out there that must remove him from consideration for the Clemson job.


Brent Venables: Brent was at K-State under Bill Snyder and coached during the most prolific run in school history. Stoops then cherry-picked him for the Sooners, forming a dynamic duo with Bob's bro Mike. It is common knowledge that the Sooners have won a boatload of football games with him on staff this past decade. Thus, Brent gets a gold star in that category. Venables is a noted recruiter and pulls tons of talent into Norman. He can get fired up and has fired up the Sooner defense to some impressive defensive performances over the years.


However, those great defensive performances have been fewer and fewer lately. Between Sam Bradford throwing 5 TD's a game and the Sooners giving up 26 or more 5 times already this season, every Saturday turns into a shootout for these guys.


I will move forward with other candidates and my opinions on these folks as we get closer to the first week of the December. However, if we hire another poor coach, at least bring in someone who will entertain me. Losing sucks, but it is a lot easier if you get to download one of these pressers afterwards (and a salute from the BCA):

I would like to commend Jimmy Barker for identifying ways to cut costs at CU. With tough times on the horizon, Barker said to hell with jet fuel and brought back this WWII barnstorming fuel saver to help with TDP's travels. 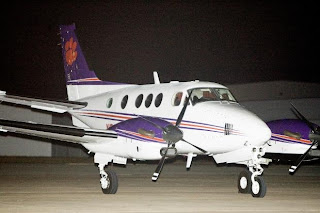