It appears that Korn's shoulder is still pretty tender, and might be for the rest of the year. It didnt look bad to me against Duke, where he went 7-12. His throws didnt look any worse than Harper's usually weak-ass back-foot throws this year.

"He is able to function, but from a strength standpoint he's not anywhere near where he was when he first arrived here," Napier said. "We all remember that guy. I think he's had two injuries basically that have set him back, collarbone then the shoulder. From an arm-strength standpoint, he is not back."

The ACC announced Monday that Clemson’s home game with Sakerlina on Nov. 29 will kick off at either noon or 3:30 p.m. and be televised on ABC, ESPN, ESPN2, ESPNU or Raycom. This basically hinges on whether we beat the Pergolas. If we do, expect 3:30 on ABC/ESPN/ESPN2, otherwise another nooner.

Since Spiller was named ACC Player of the Week again, I'm left to wonder what he and JD might do if one of them actually got the ball 20-25 times a game, like they would under Danny Ford. Spiller got that many total touches this week, but JD didnt. You can try to tell me that our OL sucks and JD has no holes to run through, but I'll point out that he had 9 carries for 43 yards, a 4+ average, and has had similar other times this year....yet still doesnt get the damn ball. Jamie Harper got 9 carries against Duke that shouldve gone to JD.

If he'd have gotten the carries he shouldve the last 2 years, we'd be talking about a few national rushing records, not just Raymond Priester's.

Looks like the interview with Foster went very well friday.

He goes on to say a decision will be coming up soon. Collegiate Times has a good review article on Foster here. I've reviewed him before here

And, showcasing the smartest play of the entire weekend....

Its so fun to see them crushed... 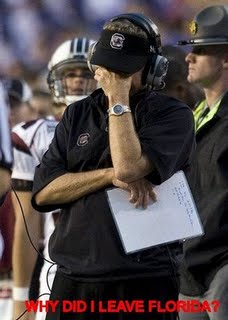 Some coaching notes indicate Muschamp might be spoken with before midweek. Texas is in a BYE week this week, and plays A&M on Thanksgiving. I'm more intrigued by Bisaccia, who, judging by Tommy West's and Sparky Wood's recruiting classes, wasnt so damn hot.

Oh and Herbstreit said today on a radio show he thinks Tubbs will come to Clemson....