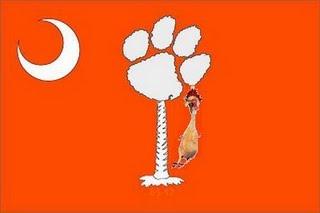 CLEMSON — The "interim" tag will be removed and Dabo Swinney officially will be named Clemson head coach within the next few days. Athletic Director Terry Don Phillips will conduct a formal interview with Swinney this afternoon, and Clemson sources indicate a formal news conference will be held Monday or Tuesday.

Swinney has not revealed his plans for a coaching staff. The most likely keeper is recruiting coordinator Billy Napier, promoted from tight ends coach to quarterbacks coach when Swinney took over. Napier has helped Swinney with play-calling.

I'm not 100% sold on Dabo Swinney. I look at him and say, "he's done everything right off the field to get this job with the fans." But people in large groups are idiots, and TNetters seem to take the cake. I see alot of improvement on the field, in X's and O's and intensity, so I'd give him 3 years. If he can't win the Division in 3, I will not support him any longer.

Some people might say "well you should give a coach time to get his players in, 4 years"....but Dabo brought these guys in himself. He knows exactly what he has to work with.

We also do not support keeping Brad Scott and his son on this staff, not by a longshot. I'd (DrB) rather offer a top-line OL coach, I'm reaching but perhaps Sly Croom would work for another Alabama grad? VK is likely out, and John Chavis is available from UT. I want Napier and Rumph to stay either way. Blackwell is over-rated in my opinion.

Strelow reports about the trick play that Ford scored on, that almost wasnt, when Cullen threw from his knees.

"I hadn’t seen that one since I ran it at Gaffney High School with the junior varsity," USC defensive coordinator Ellis Johnson said. "And we scored on it, too."

Ford went undetected along the left sideline and ran downfield uncovered at the snap.

However, senior quarterback Cullen Harper got unexpected quick pressure from USC defensive lineman Jordan Lindsey as he dropped back to throw.

Lindsey spun around Harper, who somehow managed to release the ball before hitting the ground.

Ford came back and caught the ball at the 34, then cut inside one defender inside the 15-yard line en route to the score.

Strelow also says in Pawsitive Press that the Tangerine will likely go for us. I'd be happy with that so long as we do get the Big 10.

So here’s calling Clemson to the Champs, where they could face Iowa or Minnesota. Wisconsin is also under consideration, but the Badgers have been to four straight bowl games in Florida.

Although Meineke Car Care (lube and tire center) Bowl and Music City Bowls are possible. We beat Colorado 19-10 at the Tangerine, in Tom's only good bowl showing if you ask either of us.

Sapakoff mentions it in Tiger Tracks, and I think it would be a fit. Tommy has said that he would only come back to a BCS-level school (thats what Terry said, Tom has been mum). I just think that Tammy will likely sit out a year or two first.