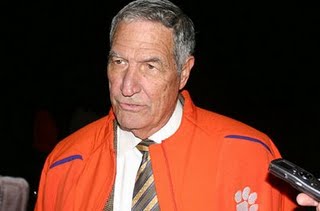 Today at practice, Figurefour's favorite coach spoke to the team at the request of Dabo.

Stallings didn’t directly endorse Swinney for Clemson’s opening, but said he was ready for a program of his own.

"What is he, 38? I was a head coach when I was 29 (at Texas A&M)," Stallings said. "He’s had a whole lot more experience than I had. I think he’ll do an excellent job. He’s well-schooled, he’s knowledgeable, he’s likable, he’s a good recruiter, he’s a loyal individual, and I think he’s ready.

"I think the worst thing that can happen to a young coach is to get a job before he’s ready. And there’s been some jobs in the past I’ve advised him not to try and get because I didn’t think he was ready. But I do think he’s ready now, I don’t think there’s any question about that."

This was arranged earlier on in the season, so I wouldnt read anything into it. He asked Ford to do the same, but Danny declined for now.

Today TDP was known to have met with the BOT about a "personnel matter", so it might reflect well on Dabo at the moment, but TDP is being (wisely) mum.

From reading that article, I'd interpret things in the following ways:
1. They may have discussed money. The President and the BOT must approve that.
2. TDP may have presented a list of candidates, though its unlikely he has interviewed all the Head Coaches he wants to.
3. TDP has picked his favorite.

Watching ESPNU's coaching spotlight tonight, Jim Donnan points to the job being Swinney's if he wins this weekend. Then again, Donnan (aka Georgia's version of Tom Bowden) also has said its Bobby Johnson's job all along.

I've said all along that my opinion on Dabo will wait until after the SC game, when I can see the whole body of his work. Right now I'm not 100% sold.

R. Philpott of CUTigers has reported that Gary Patterson did meet with TDP today. I'm not allowed to post the text of the article.

The powers-that-be at TCU are preparing for the departure of football coach Gary Patterson, sources close to the program tell CUTigers.com.

Now, bear in mind that CU Tigers does tend to post some bullshit. I trust Rivals reporting a little more, and they have not reported this as of midnight.

If Patterson was the subject of the BOT meeting today, I'd be quite happy.

Up til now, we know the following
-Troy Calhoun, Gary Patterson, Brent Venables, Bud Foster, Mike Locksley, and Lane Kiffin were interviewed for the job.
-The agent of Fulmer was contacted. Brady Hoke (Ball St) was contacted in some form.

-Lane Kiffin is a top candidate at Tennessee, and I think a good fit to re-energize the program there. Brian Kelly is mentioned alot as well. I reviewed both previously.
-Virginia Tech is reportedly looking to give Foster the same deal that Muschamp has, but if Clemson offers now, he's ours.