Coaching Opinions/Les Miles has a Clone in Pro Football

Share All sharing options for: Coaching Opinions/Les Miles has a Clone in Pro Football

Today we will discuss the two initial fan favorites to lead the Tigers next season:
Dabo Swinney and Will Muschamp.

Let's begin with Muschamp. Will Muschamp is the current DC for the University of Texas. His playing career included a stint with Ray Goff at JAWJA, so he didn't necessarily learn anything about winning football games while in school. However, the walk on was a defensive co-captain before he graduated, so he was respected amongst the ranks in Athens. At Allbarn, Muschamp worked under Brother Bill (M.F.M.), so he gains some street credit there (even though this was only a GA job under Oliver, anyone who gets praise from and coaches under Bryant, Ford, and Stallings gets massive props). His accolades since teaming up with Saban have been well documented and well deserved, specifically the LSU defense of '03. He has maintained consistency at the collegiate level with Auburn and Texas since his split from Saban. The only major hiccup that we have seen from Muschamp would be the brutal four game stretch earlier this season against OU, Mizzu, OK ST, and Texas Tech where the Longhorns gave up 24 or more in each contest. I guess that kind of stuff happens when you play teams ranked in the top 11 four weeks in a row and have the likes of S. Bradford, Chase Daniel, and Mike Leach's version of a Mike Martz offense on crack.

Pretty much, Muschamp fits the billing for what Clemson is looking for in a football coach. Will is a winner, a great technician, and learned from arguably the best coach in the game today, Saban. He is fiery, always pumped up, and doesn't hesitate to get in someone's face. His players love his attitude and would probably run through a brick wall for the guy. He can definitely recruit, is from the Southeast, and knows how to pull talent from the Lonestar state. The final plus marks come from his age and experience. At 37, Muschamp is about to hit his coaching prime with a lot of years left in the tank. He still has plenty of energy and a tremendous background as a collegiate defensive coordinator with a year of professional experience.

Negatives for a Muschamp hire include lack of head coaching experience and probable inability to be in place by the middle of Dec. This would definitely hinder this year's recruiting class (as with Venables at OU, there is a decent chance that UT could sneak into a national championship game or BCS game, and thus CU would be handicapped in the recruiting wars).

By far, Muschamp is the most well rounded realistic candidate (specifically from the pool of candidates with no head coaching experience) on the board now. I would be pleased with a Muschamp hiring, especially if he keeps this up:


Dabo Swinney (this one could be lengthy and winded, but deal with it): What is there not to like about the way this guy carries himself? He isn't scared of a damn thing and will let you know that he really doesn't care how the man before him did it. That is fairly refreshing for someone with something relavent to contribute talking to the Tigertown media (although I really don't give a shit to hear how much air the tires need or what color paint would look best on the broken down Camero he often references).

Let's also look at his background. Often speaks fondly of his youth and admiration for the Bear (that is a good start for anyone, football player, coach or just a breathing creature). Played football (walk-on turned scholarship winner) with the Tide under Stallings, scoring a national championship his senior year. Coached for the Tide under Stallings as a GA, then under DuBose (a campaign featuring the least successessful of the Bear's boys, but had all the necessities of a post-Bryant era coaching feasco: a pissed off fan base, a sex scandal, an SEC championship, the traditional ass kicking to the curb, etc...). Dabo then began slinging real estate and recharging the batteries for the job at CU. At Clemson, there is no question that Swinney was a positive force in the recruiting arena. As a receivers coach, there is still some work to be done. However, Swinney was recruited by Saban and showered with cash to return to his Alma Mater to coach, which gives him some definite style points. To this point in his career, the man spent the better half of his life at Bama and Clemson (obviously God thinks highly of Dabo).

Dabo the head coach emerged a few weeks ago in a very long-winded presser that was interesting, yet less informative than a M Leach job. Dabo speaks fairly intelligently, is charismatic, believes in everything that he does, and receives constant praise from Gene Stallings confirmation.

Swinney essentially came in and disavowed any knowledge of Tom Bowden, then fired Tom's right hand man in his first executive act (two gold stars for the combo hook/jab). He also scored points by requiring practices to be focused, requiring players to dress appropriately, and interacting with fans--all things that Tom seemed to ignore as the HC. Dabo also got rid of excuses and endless comparisons to teams that are much better than Clemson, which also is good for PR purposes. Dabo also embraces a Pendleton resident who also held the Head Coaching position at Clemson, and that plays a nice role with the CTiger faithful. Finally, the players all like him and can relate to him. Any way you slice it, it is an upgrade from the previous regime.

"Coach Swinney’s got swag, that’s all I can say."--DeAndre McDaniel
pimp my coach

The flip side of the Dabo bandwagon includes a current 1-2 record as interim coach, half effort from some receivers (Randy Moss style effort with about 1/3 of RM's talent), and the task of improving a team that was coached into mediocrity for 10 years running. Lack of head coaching experience coupled with lack of diversified coaching/playing experience (WR/TE position coach only) make you wonder if a D-1 job at a BCS school is to fast, too furious at this point in the game. All agree that Swinney will make a good coach someday, but should he be refining his skills at CU or at a MAC school?

Personally, I like Dabo. He speaks well, relates to everyone, and realizes that winning football games at Clemson is important but there is a fairly large amount of work that needs to be done to become a consistently good team (first and foremost, lose the toolbag seen below). 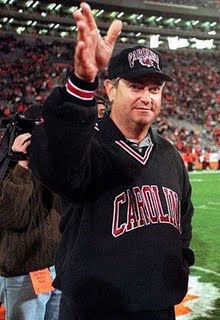 With three games left, I still get a few games to continue to evaluate Dabo's progress and how well he is coaching in spite of the douche-baggery that has been going on at Clemson from the top down for the better part of a decade.

Switching gears, how many of you witnessed the Jets-Patriots game Thursday and saw Eric Mangini go Les Miles on national TV? The prevent defense coupled with Randy Moss getting a free release at the line of scrimmage at the end of the game allowed the Jets to to one thing. It allowed the Jets to attempt to pull defeat from the hands of victory (this is a topic--the prevent defense--that deserves an entire 20 minute rant.) Then, in true Miles fashion, why in the hell allow a qb to have all freaking day and Randy Moss to move freely? Further, all this debauchery of the modern game of football occurred a mere 20 yds from the endzone and with 8 sec left in the game. Never fear, though, because in the spirit of the Miles doctrine, the Jets win a coin toss, and luck their way into a field goal to win in OT. The only thing missing from this fiasco was a live tiger inside the stadium.

I do have to say that I want to go to the craps table with this duo. However, watching these guys coach is almost as ridiculous as this guy leaving leaving a track and field event to do this: