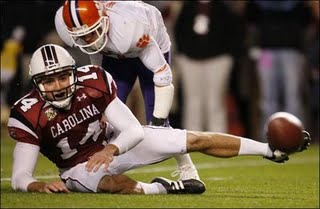 History
Series History:
Clemson leads 64-37-4
at Clemson: Clemson leads 15-8-1
at Columbia: Clemson leads 49-29-3
Last 10 Years: Clemson won 8, S Carolina 2 (theres that vaunted SEC toughness!)
•This will be meeting number-106 between Clemson and South Carolina and the 100th consecutive year the two schools have met. That is the third longest streak of consecutive years played in a rivalry in the nation.

Every year, its "We played tougher competition than you" or "I would sure like to see what Clemson would do with our schedule"(Spurrier) when Clemson is ranked and Sakerlina isnt. So lets look at how things stacked up this year.

What about the "superior SEC Schedule we always play"????

I take this with a grain of salt. I would say the ACC is more even, though behind in "talent" to the other two conferences. That poses the question to you, what makes a conference difficult? Every team knows you, and what you run. Their players know your players, and they see them every year. IF all the teams are fairly equal (P A R I T Y) then every game is a toss-up.

Strangely that sounds like the same SEC argument Coots make.

Which of those teams have a good passing attack? Arkansas is ranked 22nd nationally. The rest are poor save one. Ole Miss has a good QB and below-average receivers. Among those they lost, only Georgia is ranked in the Top 25 in pass offense, however SC played them very well, as they generally do.

What good running teams have they played? Well LSU and UGA are capable, but have been inconsistent if you look at the whole season. Florida is the best (#11 nationally), with Wofford as #2 in 1-AA. The best rushing offense they've played and beaten in Div 1 is Ole Miss.

Defenses: Neither team is in a pass-happy conference like the Big XII, so our passing defense statistics are misleading. I would say after watching Sakerlina that their secondary is very good and is where most of their talent lies. Both teams play alot of zone coverages, which prevents opponents from hitting many big plays and pumping up the pass defense yards allowed. SC plays a 4-2-5 and 3-3-5 hybrid, with alot of S and CB blitzes. However, SC is still soft up the middle if you can handle the 500lb walrus at NG. LSU had considerable success running directly at them...dont bother with sweeps and pitches because their speed, together with our bad blocking, will negate any advantage Spiller's speed gives us. JD should get a steady diet of carries, and if he gets over 20 Clemson beats them by 10.

Cullen will be picked off at least once however.

Clemson's LB play has improved for most of the year, so the rushing yards allowed has been respectable for the most part this season, although the pressure from our Down 4 has not been good at all. The soft zone coverages will continue against the Cocks, and Jared Cook likely will have a big day against Sadat Chambers over the middle. The Fun N Gun excels at putting space between WRs and multiple defenders. Double teaming McKinley and holding Cook to a non-factor would guarantee a Clemson win. I do not expect Clemson to get more than a couple sacks, but I do believe they will pick off the Blake Mitchell Clones at least twice.

Offenses: Well we know CU's problem is entirely the OL and the bad coaching over the last few years that cannot be overcome in 6 weeks by Swinney. Cullen is hot one day and cold the next, and a big factor in that is poor protection. With Korn gone, Cullen will have to do it himself.

While SC can protect the Committee at QB, none of them have shined. They are just as awful as we are on offense, and Mike Davis is average at best. He might break a couple big gains against Clemson, but otherwise the running game is not a factor because of poor OL blocking on SC's part too.

Not much can be gleaned from this. Vandy has gone down as the season progressed, Ole Miss has gone up the last 4 weeks. Wake Forest has gone down since the Clemson game. You can see that on paper its 2-1 for the ACC from these teams, but I never pay attention to that. I could go on to point out how the ACC has fared against SEC so far in other games, but it doesnt have anything to do with the one on saturday.

Our Predictions
DrB: If Clemson can run the football up the middle on them, and then Dabo decides to give the ball to JD, we'll have no trouble pounding them. I would blitz these terrible QB's on every 3rd down play and force them to beat us on 3-step drops. However, VK isnt the world's best at calling blitzes, and these teams are pretty equal in their shittyness.

Figurefour: Cullen Harper will need to "manage" this offense to avoid getting in trouble with the USC secondary. JD should have a nice day if the Tiger offense feeds him the ball inside the tackles (to the tune of 17+ carries). Defensively, CU must put pressure on whomever SOS puts under center to force poor decisions out of Smelley/Beacher/Garcia. With Sapp out of the lineup, depth at the end position could be an aspect to observe, particularly if Clemson's offense cannot move the sticks. The key matchup defensively will be TE Jared Cook vs. Clemson's secondary. Cook has good size, speed, catches well and is an offensive threat from the TE position.
This contest will be pretty bland to watch, and the team whose offense doesn't screw up the most will prevail.