Not a surprise as we found out yesterday from Rivals that Foster would interview for the Clemson job today. Here is the Dinich ESPN article:

Virginia Tech coach Frank Beamer said he told his players after their 16-14 loss to Miami Thursday night that defensive coordinator Bud Foster will interview for the Clemson job, most likely on Friday.

"I believe it's tomorrow," Beamer said Thursday night. "I just told our people in there I wish him well. He's done a great job for us and he deserves the opportunity."

Foster, who has spent the past 13 seasons as the Hokies' defensive coordinator, has earned respect throughout the country as a motivator and is regarded as one of the top assistants. His defenses have been among the nation's best in recent years.

In 2006, he won the Broyles Award, which is given to the top assistant in the country. His 2005 and 2006 teams both led the nation in total defense.

Foster is one of several candidates who have been confirmed as interviewing for the job to replace Tommy Bowden, who stepped down on Oct. 13 after 10 seasons there. Oklahoma defensive coordinator Brent Venables and former Oakland Raiders coach Lane Kiffin also have interviewed with Clemson athletic director Terry Don Phillips in the past two weeks.

"It definitely hurt," cornerback Victor "Macho" Harris said of the news. "It's my last year, but he's a great, great, great teacher, great helper, I mean a great father figure in our lives. I'm not saying he's going to get the job, but just to have that piece missing, if he does get the job it will definitely hurt me and the younger guys behind me. I know they'll be hurt. I kind of want to be selfish and hope he doesn't get the job, but at the same time, coach Foster deserves everything he gets."

The Tigers also are interested in talking to Vanderbilt coach Bobby Johnson, a Clemson alumnus, and Texas defensive coordinator Will Muschamp, according to multiple sources.

Interim Clemson coach Dabo Swinney, whose Tigers have won one of three games following Bowden's resignation, also is considered a possible candidate for the full-time position. 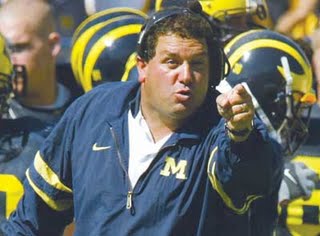 Last night Rivals also reported that Ball State Coach Brady Hoke was contacted about the job. I don't believe he's a serious candidate really, but it doesnt hurt to look since the team is undefeated. In all seriousness it is Ball State, the doormat of the country, and Hoke has made that team bowl eligible the last couple years. He's been there since 2003.

He's a former Michigan and Oregon State DL coach who is originally from Ball State, but Ball State's defense hasnt been particularly good since he's been there, until this year.