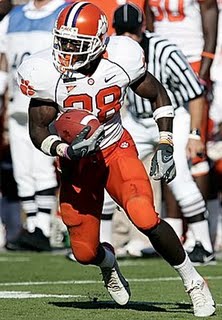 -WTF was Harper looking at on the first INT? he looked left, looked back right, and the WR was just stopped. At least the D held to a FG. I'm sure they are tired of being thrown right back out after Harpers fuckups.

-The 2nd CU drive, we came right out and ran the ball and the OL made the blocks to seal off the defenders on both big plays, encouraging.

-Fumbles on Punt Returns are inexcusable, that guy just slapped it out of Spiller's hand. The D pulled us out by forcing a fumble on the reception, again, holding us in games. I'm so glad they did something about Austin's inability to snap a football...and moved his ass to G.

-Why the hell is the replay system not working? You have refs in the booth who can watch the TV dont you? They get the same angles we get. Clemson's playcalling on this 2nd TD drive was very good, and they made the catches and throws on the deeper balls.

-VK's 'bend-but-dont-win' defense is definitely giving up the yardage, and getting away with a few mistakes from aggressiveness. Crane is finding all the holes in VK's zones, and it looks like Cover 0 today instead of Cover 2.

-CJ Spiller becomes the only Clemson player with 2000 rush, 1000 Kick return and 4000 all-purpose....and just think what he would've done had Bowden learned how to stick to running the football when it worked. I'm ecstatic that they set up passing plays for him, but today he has really come to play and is making people miss.

2nd Q-1st and Goal at the fucking 1 yard line and cant score the TD. The play call on the fake with Harper that resulted in a sack was stupid, run that with Korn, Harper will just fall down when someone touches him now.

For the most part in the first half I'm happy with the playcalling, only a couple screens, but we should be able to run the football better than this. The defense is playing well.

-Spiller's big gain is negated by a holding call by one of the linemen trying to protect Harper, not those blocking for Spiller. Ford was standing around instead of blocking downfield. He slams his head on the turf and looks like he has a concussion. This is of course followed by another fuck-up by Harper. Jesus can this guy not see the players in opposing colors standing RIGHT IN FRONT OF THE GUY HE'S THROWING TO? WHAT THE FUCK IS HE LOOKING AT? Then the Defense gives up another TD on a short field following a Harper turnover.

-Jacoby Ford on a end-around....can we please throw him the ball downfield? The the first time they run him on a deep-in route, a hold calls it back. Buchholz misses his first FG. We should really have 28 points in this game.

-I suppose I should stop praising Powell, though it looks to me like they were offsides on the punt block - TD. At any rate, 82 came right up the middle untouched because the C and the G stayed side-by-side instead of the G looking to his left....immediately followed by another shitty underthrown ball by Harper for yet another INT on the first play of the next CU drive.

-BC's next TD was a pushoff, no question to me. #2 just threw his coverman to the middle of the endzone before he broke to the back corner. We just blew a 17-0 lead. The defense gets saddled with yet another short field after a Harper INT and can't hold it.

-CJ deserves the game ball, he's the only guy on offense that came to play today. Harper makes a good throw to get 1st and Goal.

-HUTCH FUCKED UP THE SNAP TOO. FUCKING CHRIST!

-Both fade routes in the endzone were done well, both good throws. I cant believe Aaron Kelly is 1st in Clemson history in receptions and receiving TDs, he has dropped so many passes that he would own that record forever if he could catch a football.

-McDaniel laid that WR out! Broke his tibia. Thats what you do on a crossing route. Bowers recovers the fumble at midfield. Why cant the OL smack somebody like that? Bucholz hits a long FG, 27-21.

While the OL started well, they failed to move BC's DL around after the 2nd Quarter. Harper is the reason this game was close. I can see why Harper would be in with it 21-17, and needing the score, but I expected Korn to play more today. The defense only gives up 7 on a short field, however they did miss two medium range FGs.

Since I'm in a good mood, I'll post this find. They are already telling me they are going to get through the Orange Crush 2-1 for a change...