Share All sharing options for: Coach candidates: Will Muschamp 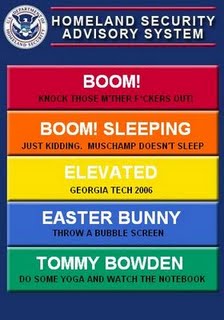 "Stats are for losers. I like winning games." Will Muschamp

Saban has called him the best defensive coach he's ever coached with.

Currently the Defensive Coordinator at Texas, and has already been credited by some writers as introducing a new intensity to the Texas defense that has been absent since Gene Chizik left for the Iowa State coaching job after their National Championship. In particular a Pass Defense that has been very bad for years. TX is still bad at the pass even with Muschamp, as they have no depth and start two freshmen safeties. They have, however, become much better at forcing interceptions.

The scheme Muschamp runs is a variation of what Saban runs right now at Alabama. Its a scheme that I've watched every week since I moved to Louisiana 5 years ago. Its also not very different from what Pelini runs at Nebraska now and what he ran at LSU, though Pelini blitzed less. Its a 4-3 scheme with a base Cover-2 package but with alot of Combo coverages and its heavy on the Zone Blitz. Rarely more than 5 will ever rush the passer, and the DE's will drop off into coverage on a LB blitz. The Combo coverage is a mix of Zone and Man, but very difficult to read because of where the DBs line up. The Safety is always a big tackler in the scheme, as they tend to move him all over the place.

This guy walked on at Georgia in 1991 and played Safety, then after graduation worked under Bill Oliver at Auburn (Oliver is the man who shouldve gotten the Clemson job after Ford was fired).
After bouncing to a few positions at I-AA schools he went to LSU in 2001, where he became DC in '02, and they won the National Title in '03. He went with Saban to the Dolphins, when many LSU fans wanted him to stay on staff, and then went back to Auburn last year before taking the Texas job this year. LSU and Auburn led the SEC in defenses every year he was at either. I suspect he'll greatly improve the statistics of a Texas D which was awful against the pass, the only question is whether he'd leave right now. Tennessee may be after him, but would he want to play UGA every year? Auburn does and he worked there, but he wouldnt take the GT job....so its an open question.

What offense will he run? Likely a pro-style not unlike Al Borgess' at Auburn or Jimbo Fisher at LSU or Greg Davis at Texas. I generally expect an defensive-minded coach to make sure his offensive line is solid and they can run the football, and this guy is about as tough and intense as you are going to find in the country. All the things Clemson needs.

Recruiting? He's been a great recruiter at Auburn and pulled in many of the starters that were on last year's LSU National Championship defense. He will come in with plenty of connections we dont have currently.

Another take...
Tennessee wants him too...