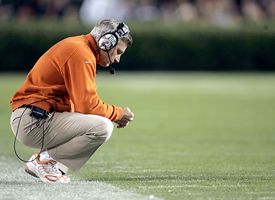 1st Wake Drive-Defense looks like they are on their heels, WF is blowing holes but calling very good plays and using most of the field. That is, until WF gets inside the 5 and goes 3 & out, that shows weakness on their OL. I can't believe they fucked up the hold, WF is usually great at the little things. Why did he even kick it?

After the first two Clemson drives- Spences new enhancements we have yet to make positive yardage!

1st Q-2nd WF Drive, more of the same. Why they wont line up and run right at us is beyond me. A good job to hold to a FG though.

WF is playing 8 men in the box to stop the run, and Clemson tests the Safeties by hitting the TE in the hands and he cant catch the damn ball. Clemson's offense is so impotent that a whole bottle of Viagra wouldnt fix it.

2nd Q-What idiot called that fake punt! Line up in the fucking I-formation and run the ISO play you ass.

8:02 Halftime-1st half is the worst example of Clemson offense I've seen in the last 10 years. Mark May was actually right at halftime, no physical or mental toughness up front.

I honestly think Korn should be in the game now, why not? Harper cant do a fucking thing. He cant sell play action and doesnt even try with the fake.

3rd Q-Clemson calls a timeout early, then get a false start penalty right after and a personal foul. First show of emotion all night from the OL, but does them no good.

If we didnt have the DB play we do, we'd be down by 35 points. This Defense is going to be so worn down from being on the field that they wont be able to keep up in the 4th Q.

Late 3rd Q-Our only drive in the game so far and we look like retards humping a doorknob. Cullen throws off his back foot all night. Clemson got a generous spot on the 3rd down run by Harper, very generous, and a miracle happens to get the TD. We get more yards on one drive than we did the whole first half.

4th Q- Harper's INT on pass to Jacoby was the 2nd time its happened on the exact same play to Jacoby this year. Defense again holds to a FG.

4th Q drive by Wake shows how tired the Defense is getting, but they wont line up and run right at Clemson. Boldin's TD was just a good play, one of few allowed by the secondary all night.

Anytime Kelly needs to make a catch, he's not going to do it (see BC last year). I count 4 passes tonight that have hit his hands and not been caught.

4th Q, after the 4th down play: I really wish Harper would look off his designed screens, he throws right at black jerseys. He barely glances another direction before throwing to a spot where the Clemson player AINT and in triple coverage.

We really shouldnt have been in this game at all, Wake's poor OL and our good Secondary play is the only reason it was close. #9 to start and 3-3 now, and we wont beat Georgia Tech next week.